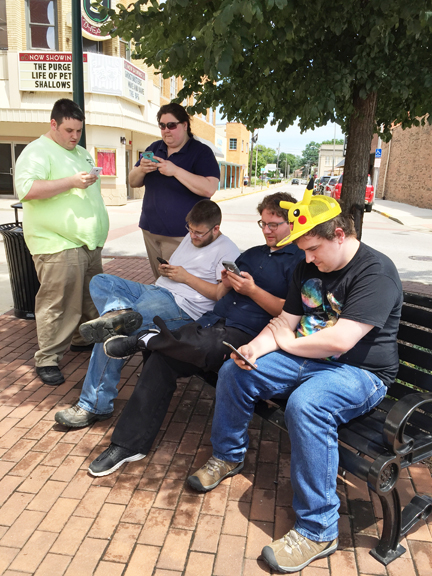 Pokémon GO has taken over, it seems.

The description of the application in iTunes starts as: “Venusaur, Charizard, Blastoise, Pikachu, and many other Pokémon have been discovered on planet Earth! Now’s your chance to discover and capture the Pokémon all around you—so get your shoes on, step outside, and explore the world. You’ll join one of three teams and battle for the prestige and ownership of Gyms with your Pokémon at your side.”

It’s gotten ridiculous (I think?). I’m torn between the absolute negligence that some game players have demonstrated — walking out in front of cars, falling off sidewalks, running into other human beings, neglecting work and even elevating multi-tasking to a tentatively life-threatening place. Obviously, it seems addictive (I have promised myself to stay away from it; I’m still battling addiction to “Candy Crush” and “Cooking Fever.”). However, on the positive side of things, it is getting all sorts outdoors. It’s gotten people walking and in fresh air. Biking through Illinois College just the other night, we counted friends or families out “Pokémon-ing” together. In fact, we’ve made a game of counting the number of individuals we see playing. They’re everywhere! 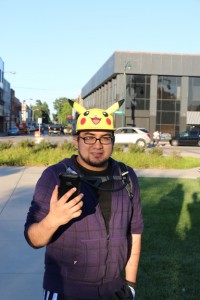 Daniel Duran was seen playing Pokémon GO on his recent trip to Jacksonville.

But, there’s more. It’s consumed various forms of social media and other small details of our lives. For example, a Snapchat friend had snapped about wishing it weren’t raining so that she could go outside to hunt for Pokémon; also, a family member has their character on the app created to look like me (see image of screenshot). It’s hilarity. While downtown during a Levitt AMP concert, I spotted a large yellow hat across the way. Undoubtedly, it was a Pokémon hat, whose wearer would explain some of the hype of the game. Daniel Duran, of Texas, was visiting a friend here in Jacksonville. Duran explained to me that the characters which you catch change depending on GPS and time of day; for instance, if you’re near a lake, the characters might be water-related, or if you are near a cemetery, Duran said a character might be a bit “darker,” such as a bat. The app uses GPS and main landmarks as “gyms” or central hubs of Pokémon. It’s quite simple and smart, really. Plus, the intermingling of a fantasy Pokémon world with our own is intriguing. 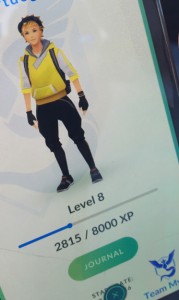 A screenshot of a snap posted on Snapchat featuring Pokémon reference.

Duran noted that Pokémon Go was similar to a dream turned reality. Clearly, the app has recently been dominating many other applications in the recent weeks. Interested in learning more about the craze? Visit pokemongo.com or simply Google anything relative and information will pop right up.