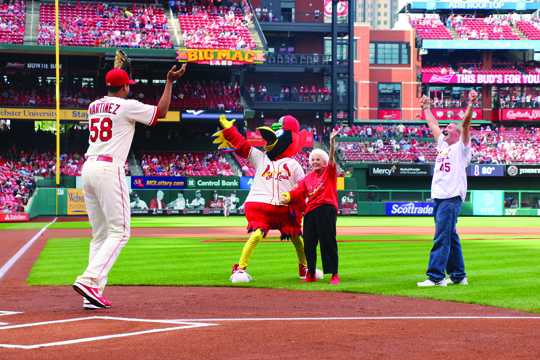 The annual Jacksonville Night at Busch Stadium has been canceled for this year. Jacksonville residents and friends were to cheer on their favorite of the longtime rivals, the St. Louis Cardinals and the Chicago Cubs, as the two baseball teams battled in the field of dirt and grass.

Alas, event organizer and Cardinals fanatic Shelley Singleton has made the decision to call off this year’s July 25 Jacksonville Night because of the spikes in positive cases of COVID-19 as of late and also because of the concerns and anticipations of this year’s Major League Baseball season.

The night has become a tradition and also an event that brings the community together. Singleton mentioned in an earlier interview with WLDS/WEAI in March that, “it’s always fun to see people of Jacksonville get together for the night at the ballpark.” Not only would the event provide a fun night of baseball, but the proceeds from this year’s event were to go to a great city cause, Singleton had said. “The proceeds this year will again go to the Jacksonville Tree Program, which if you drive around town now, you’ll see some trees with green ribbons on them, and those are all planted by that program. So you will continue to see more trees being planted in our area. We have planted trees down by MacMurray, Illinois College, the city cemeteries, up and down boulevards, they are all over town,” she said in the interview.

For those who had already purchased tickets to this year’s canceled July 25 Jacksonville Night at Busch Stadium, the online purchases will be automatically refunded. For in-person purchases, the person who purchased the tickets needs to go to the Prairie State Bank & Trust branch for the refund.

This year’s event sponsors were Prairie State Bank & Trust, The Source, WLDS/WEAI Radio and The Pointe at Jacksonville. Scotty DeWolf was to throw out the ceremonial first pitch and the event photographer was to be Kyla Hurt. Singleton noted on the event’s Facebook page, “We appreciate everyone’s support! … Thank you again!! See ya next year!!”