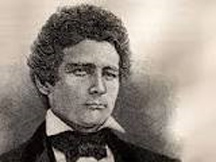 It’s more than a street.

Hardin Avenue in Jacksonville is named after John J. Hardin, a local hero.

John J. Hardin was born in Kentucky in 1810, the son of Martin D. Hardin, a lawyer and State Representative who briefly served in the U.S. Senate. John Hardin was also a lawyer when he moved to Jacksonville in 1831. He served in the militia in the Black Hawk War, and then was the general in command at Carthage, Illinois, during the Mormon troubles when Joseph Smith and brother Hyrum were murdered.

Hardin was a cousin of Mary Todd and it is reported that Abraham Lincoln first met Mary Todd at the Hardin home in Jacksonville. (Lincoln often quipped that God only had one “d” but the Todds had to have two.)

John Hardin played role in a famous Lincoln incident. In 1842, Lincoln’s political rival, James Shields, got in an argument about an article Lincoln had written about Shields. Shields challenged Lincoln to a duel and Lincoln chose to fight with broadswords. When Hardin got word of the duel, he arrived at the scene, ridiculed the combatants and caused them to drop the matter.

Hardin and Lincoln, both members of the Whig Party, became rivals for the U. S. House of Representatives. Lincoln withdrew and Hardin won the seat in 1843. To avoid conflicts between them, Hardin, Lincoln and another candidate agreed to rotate the Congressional office. Hardin, however, filed for re-election and Lincoln was irritated. “Lincoln’s adroit maneuvering and tireless efforts made it clear to all that Hardin’s chances of securing the nomination for himself were doomed,” wrote Paul Findley in “A. Lincoln: The Crucible of Congress.” In 1846, Hardin withdrew as a candidate.

With the outbreak of the Mexican War, Hardin recruited the First Regiment, Illinois Volunteer Infantry, and served as commanding officer. He was killed at the Battle of Buena Vista, Mexico, February 23, 1847. He is buried in East Cemetery in Jacksonville.