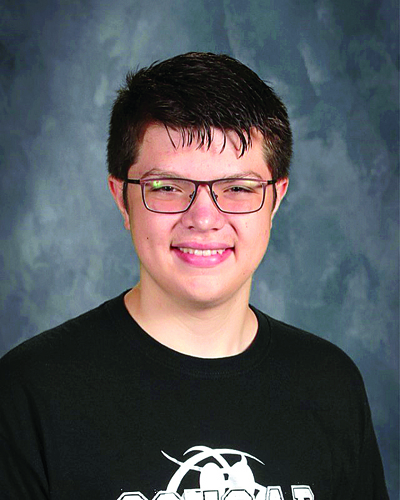 Justin Galloway took to the court during a recent game against Barry Western to play with his teammates as part of his senior year at Winchester High School.

Since his seventh-grade year, you could see Galloway on the Cougars bench; keeping stats for the junior high boys team and following that job into high school.

Galloway was diagnosed with autism and ADHD at the age of nine. This year, he put that diagnosis aside and traded his clipboard in for a jersey, allowing him to get the most out of his senior year of high school. He put in the work and did what was asked of him. All of that hard work and determination paid off during this Senior Night game.

Coach Sichting recognized the efforts of Galloway and along with some help from his friend at Western, Coach Curtis Stout, the teams worked to make his Senior Night a success.

The play was designed, they got Galloway the ball to post and take a shot for the first play of the game. The rebound from his teammate was not needed, Galloway made the first shot unassisted. Galloway and the entire gymnasium erupted with excitement. He exited the court to cheers and high fives from his coaches and teammates. He assumed a seat on the bench to cheer for his team.

During the fourth quarter, an opportunity came to place Galloway in once again. When questioned who he should go in for he responded, “That’s ok, I don’t have to go in.” That is the type of person Galloway is. He had the opportunity to play and score earlier in the game and he was thankful for that. The Cougar bench insisted he go back in to play.

He got off two more shots; the last one, a 3-pointer, resulted in a gymnasium filled with cheers and tears.

This is a day Galloway will never forget. His parents are thankful for the support and love they receive from their community.

Jason Galloway, Justin’s father said, “This is small-town living at its best. I could go on forever, everyone was so happy for him, we will never forget this day and the love we felt from our community.”