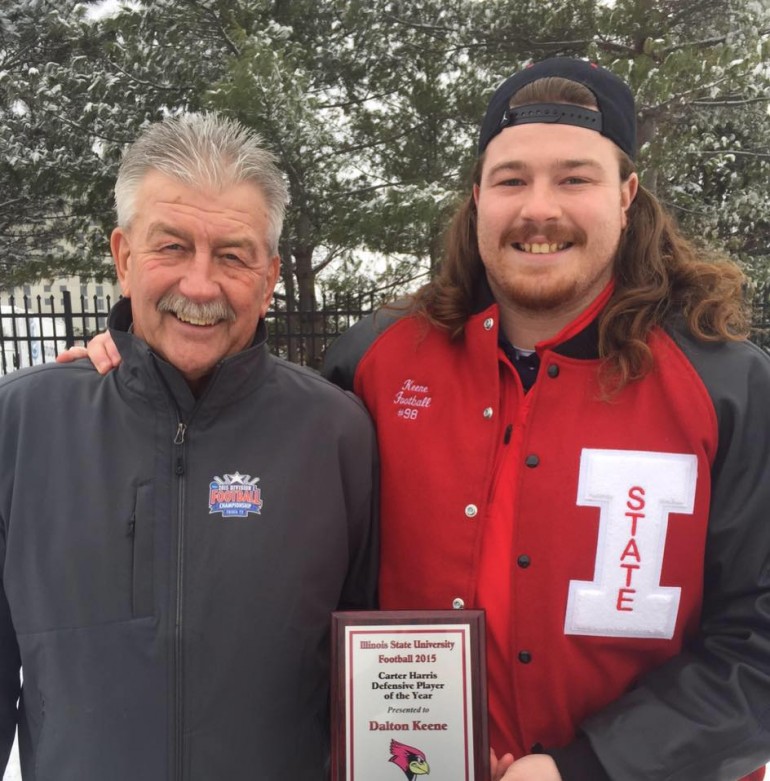 This past week at the Illinois State University football awards banquet, Jacksonville native Dalton Keene was named the Redbirds’ Co-Defensive Player of the Year, along with senior linebacker Pat Meehan, for the 2015-16 season. Starting all 13 games on the Redbirds’ defensive line this past season, Keene recorded 59 total tackles, 10 tackles-for-loss (-19 yards), 5 sacks (-11 yards), 3 pass break ups, 4 hurries, 1 fumble recovery, 1 blocked kick, and a safety.

“Well to be honest, I didn’t expect to even be nominated for it, I thought Teddy Corwin, Alex Donnelly and Pat Meehan were for sure going to win,” Keene said of the award. “When I was nominated I was kind of stunned really. Another thing I guess I realized is that (my coaches) have high expectations that maybe I didn’t understand at first when I got to ISU. Now those expectations are even higher and I’m going to push myself even harder this offseason, summer and next regular season, because our main goal is to get back to the national championship and win this time.”

Over the past two seasons the Redbirds have a combined record of 23-5 with back-to-back Missouri Valley Conference titles and one FCS National Championship game appearance at the conclusion of the 2014-15 season, when Keene was a redshirt freshman. It was in that national championship game, against the four-time defending champions of North Dakota State, that Keene really showed his potential as a difference-maker on the Redbirds’ defense, registering 4 tackles, a sack, and 2 tackles-for-loss. Unfortunately, Illinois State eventually fell to NDSU in the title game, a contest ultimately decided by the final possession. And as Keene mentions, getting back to Waco, Texas – where the FCS Championship is played – is the team’s ultimate objective.

“I have a lot to work on still, I’m a young guy and I have a lot to learn,” said Keene, who has two years of eligibility left at Illinois State. “I played my role in that game to the best of my ability, when the older guys got tired or needed a quick break, I went in and did the best job I could.”

When Keene initially arrived on the campus of Illinois State University in Normal, Ill., his first transition in terms of football would be moving from his high school position as wide receiver/defensive end to being a full-time defensive tackle. After seeing significant time during his redshirt freshman season, including four starts, Keene earned a permanent starting role as a sophomore this past fall. During his time at ISU, Keene has witnessed head coach Brock Spack transform Illinois State into a perennial FCS power, spending most of the past two seasons ranked among the top ten teams in Division 1-AA, as well as sending a number of players to the NFL.

“I believe everyone has taken pride in building our program up. The guys know what we need to do and the coaches aren’t even comparable in my opinion, they are fantastic, every one of them brings passion and fire to the game,” Keene said of the program. “I’m honored to have played with some guys who’ve been able to take their talents to the next level, every one of those guys is a role model to us still here at ISU.”

In terms of his future plans, and whether or not they involve playing football at the next level, Keene said, “I’ve got time to decide what I want to do. I want to try and see what I can do and if I can play at the next level, but for now I’m focused on winter conditioning and our offseason lifting program. To be able to go pro would be unreal, so I feel like I’ll give it my best shot.”