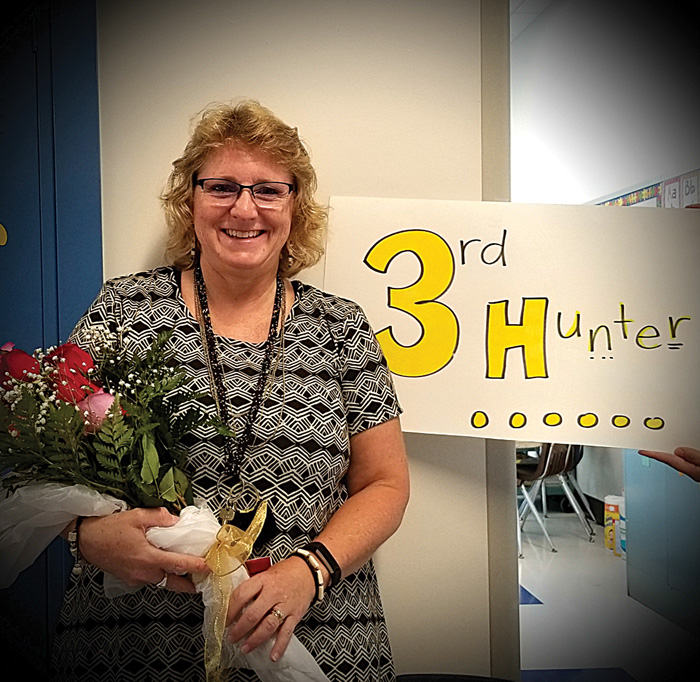 Guinea pigs, salamanders, tadpoles, insects, fish … and the list goes on and on. Yes, “Mrs. (Kelly) Hunter” always enjoyed having animals in her classroom and often invited a pet store to bring some of their critters to school for a visit. This dedicated, kind, professional, motivated, excellent educator was a favorite to so many fortunate students for 34 years!

Her last year draws to a close; I stopped by after school recently to reminisce and discuss her retirement reception scheduled for May 30. However, as I entered the classroom, I first had to stop and say hello to Snoopy, the turtle, who is in a much bigger tank than he/she started out 30 years ago at South Jacksonville School in Julie Applebee’s kindergarten classroom.

Growing up south of the Chicago area, Kelly shared that her mom knew this daughter of three was going to become a teacher because she was always playing school. With an interest in teaching the hearing impaired, she attended MacMurray College and graduated in 1985 with a double major in elementary and deaf education. Her first job was as a hearing impaired itinerant teacher in Taylorville and Christian County.

The next 18 years, Mrs. Hunter taught second and fifth graders at Jefferson School in Jacksonville, and recalls getting to know her students and their parents better by “home visits,” school carnivals and chili suppers. She has fond memories of extended field trips to the The Gateway Arch and The Magic House in St. Louis, trips to Springfield’s State Museum, plays/musicals at Sangamon Auditorium, and Passavant Hospital’s Mini-Medical Days.

After Jefferson closed in 2004, Mrs. Hunter was reassigned to South Jacksonville School and taught fifth and sixth graders, specializing in science for ten years. As a teacher myself at South during that time, I was always impressed with her knowledge of plants, animals, geology and astronomy (students thought the Star Lab was so cool!). She dedicated a lot of unpaid time toward science projects and experiments or organizing science fairs — and, those fish tanks and animal cages didn’t clean themselves on weekends. I’m wondering how much she spent out of her own pocket on supplies for experiments, animal food, litter, colored rocks for the fish tanks and all that is required when housing various critters. She attended several summer classes at Eastern Illinois University (EIU), which provided many science supplies to use in the classroom. Her love of science rubbed off on both sons, Austin and Keaton, who are now pursuing science careers of their own. She often took photos and her sixth graders looked forward to their recognition night when they got to see her PowerPoint with memories of their last year at South.

In 2014, she chose to teach second grade down the hall and unboxed some favorite materials she had used back in her years at Jefferson. Of course, she continued to be a great science teacher, but I feel it is important to mention that elementary teachers also have to make time to prepare lessons in reading, math, social studies, spelling, writing, language and handwriting, plus work Chrome books into many of the lessons. Thus, many papers are taken home to be graded. This final year started out with a lot of changes … a different classroom; no more sixth graders; teaching a different grade (third); a new, outstanding principal, Tim Chipman; and a freshly renovated building with air-conditioning (a dream I never realized), more restrooms, spacious offices, a new kitchen — not to mention no longer having to dodge balls from the gym when you needed to get to the library or cafeteria!

It would take some time to come up with the number of students Mrs. Hunter has taught through the years, but it’s more than a thousand! If she chooses to substitute teach, that number will grow even higher! When out and about, she tells me it’s heartwarming to run into former students and parents, have a quick chat and maybe even get a hug. Speaking of parents, she played on a mothers volleyball teams for 19 years!

So, what’s in the future? She will continue working part-time downtown at Just Good Trade, continue helping with Camp Courage in July, catch up on her reading, possibly substitute, spend more time with family, travel and, who knows … maybe she’ll work at a pet store?

So… NEWSFLASH! … Spread the word!

There is a retirement reception for Mrs. Hunter on Thursday, May 30, from 4 – 6 p.m. at South Jacksonville School, 1700 S. West St., Jacksonville. There will be refreshments, memorabilia, photos, a slide show and lots of visiting. Former students will be asked to sign one of her specially made T-shirts. ’ve even invited the infamous Snoopy! Hmm … do turtles retire?