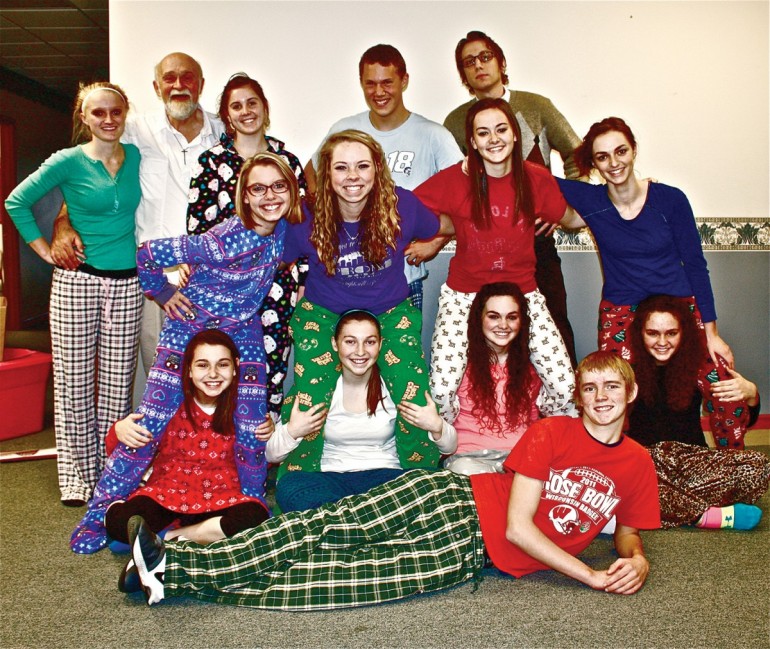 I recently had the pleasure of watching a performance by Ken Bradbury’s LLCC Traveling Theatre at Murrayville Grade School. The class began 35 years ago at Triopia as part of his high school theatre program; but, he discovered a way to expand the program at LLCC with both high school and college students.

They tour the area grade schools and perform 4 shows a day for 16 schools and 4-6000 kids; but, they are also rehearsing for their Christmas Show. This year’s grade school performances are centered around a group of pirates that travel around and steal imaginations from children. It’s a pretty wonderful sight to watch a room full of children realizing how precious their imaginations are. Ken told me about one beautiful moment where, “at an Early Start program, one little boy just lovingly smiled and opened up his arms to offer his imagination.”

After they promptly packed up their sets and props, I followed them to Best Buffet to get more of the story. Brittany Davis has been with the class for four years and choreographing for the group. This year’s new challenge was a dance sequence inside of a bag. I was amazed when she told me she had never seen what the dance looks like, she just goes with her instinct and trusts that the dance works. It’s a great moment onstage! Brenan Pool is a Freshman at Triopia who says that he loves seeing the kids get excited and interacting with them and “getting it”. Elisabeth Werries, also a fourth year veteran, was very strong as “Captain Nosalia Picker” in the pirate show, but is excited about the message behind this year’s Christmas show. 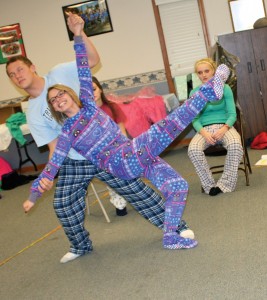 On the day before Thanksgiving, I headed down to the Arenzeville UMC to watch a rehearsal of “Ho, Ho, Ho, Snow!” I watched a delightful story about a bunch of kids who get stranded during a party by a freak snow storm and will miss Christmas. Many of them are upset that they won’t be able to get their materialistic wishes granted, a couple of them tell stories to pass the time, and one of them obsesses about food. In the end. they realize that the holiday is really about their families and celebrating the Season together. While the rehearsal continued, the snow really did begin to fall. It was beautiful sight, the large flakes falling while the kids rehearsed.

“Ho, Ho, Ho, Snow!” written by Ken Bradbury and featuring: Ally Bunfill, Elly Crawford, Mackenzie Musch, Emily Burns, Abbie Link, Elisabeth and Hannah Werries, Brittany Davis, Alex Stanberry, Clara Lee, Jamie Schnepper, Kyler Miller, Brenan Pool and Rachel Skillet, performs at Playhouse On The Square on Saturday, December 13th at 5:00 p.m. and Sunday, December 14th at 2:30 p.m. Tickets are $5 for adults, $2 for Youth 12-16 and Free for those Under 12 and can be purchased in advance at LLCC, Times Square Sewing and County Market and is meant to be shared with the entire family. Please bring a canned food item that will be donated to the local Food Pantry to leave at the door.