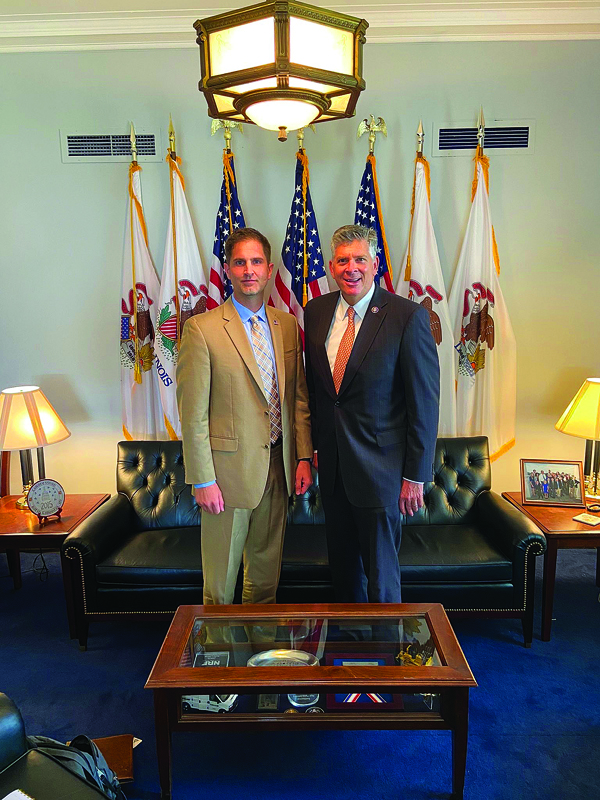 Manker and LaHood also talked about infrastructure needs of the Village, IT Security, and other topics important to South Jacksonville. “The Congressman and I had a productive meeting where I was able to share with him some of the issues facing South Jacksonville residents, and also talk about some of our shared ideas for a strong future in Central Illinois.”

“Rep. LaHood graciously offered, among other things, to write a letter to the Federal Communications Commission (FCC) on our behalf about misleading cellular coverage maps, primarily that of telecom giant AT&T, and the serious impact of poor cellular connectivity on our Police, whose vehicles routinely cannot connect to AT&T’s network,” Manker said.

“I also shared with Congressman the many frustrations I have heard from people who cannot use their cell-phone to connect or make basic calls, and I described how this issue impacts our local economy.”

When discussing IT security, Manker informed the Congressman that under a previous administration the Village of South Jacksonville paid a ransom of taxpayer dollars to hackers in order to regain control of internal systems—a fact kept secret from the public.

“I had a good meeting with @MayorManker of South Jacksonville today. We discussed rural broadband and IT security issues. I will continue to work with Mayor Manker to support @SJacksonvilleIL.”