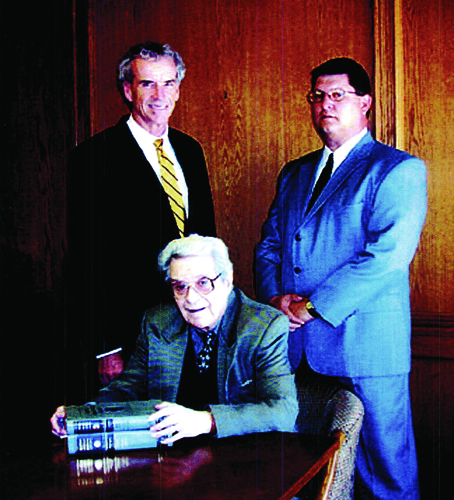 As McNeely takes on the sole ownership of the firm, he reflected a bit on his career, sharing, “I was initially employed as an associate of Thomson & Strawn for five years. I was a partner with Robert B. Thomson, Jr., in the firm of Thomas & McNeely, P.C., for two years. I ran solo from 1981 through 1986. In 1987 I teamed up with the firm of Thomson, Mann, Mann, Mitchell & McNeely, P.C. The partners were Ralph Thomson, John Mann, Jim Mann, Richard Mitchell and myself.”

Over the years, those partners and others came and went. Rich Mitchell was appointed a Circuit Judge. Jeff Tobin joined the firm but left to go to work for the State of Illinois, eventually returning to this area for work as the Associate Circuit Judge in Morgan County. Rick Crews then joined the firm. Thomson died in 2007 and shortly after that Mark Thielen and Jon Hurst joined the firm. Hurst and Thielen left in 2017 and 2018 respectively. Rick Crews left to become the Scott County States Attorney in November 2020, leaving McNeely as the sole member.

McNeely attended Routt Catholic High School and then graduated from Illinois College in 1971. He began practicing law in 1974. He’s spent his entire career in Jacksonville, specializing in probate and real estate.

“Probably the biggest change I’ve seen is the technology aspect. We always hand-delivered or mailed complaints, motions, pleadings, etc., to the Circuit Clerk. We would get our copies file-stamped by the Clerk and then bring them back to the office. Now all pleadings are filed electronically. All hearings were conducted in the courtroom or the judge’s chambers with the attorneys and the judge present. With COVID-19, many motions are conducted by Zoom or by conference call,” McNeely says.

McNeely was married to Susan Lemon in 1977. She died in 2013. McNeely is the father of three sons and a daughter and is married to Barb Bell.

Looking ahead, McNeely has no near plans to retire. He says, “I still enjoy working and my clients. I have loved practicing law in Jacksonville. Many of my clients are my friends. Also, I have a wonderful staff who certainly make my job easier.” He will continue to be assisted by his loyal staff of Anne Herring, Kathy McCarry, Renee Tobin and Nancy Ehlert.