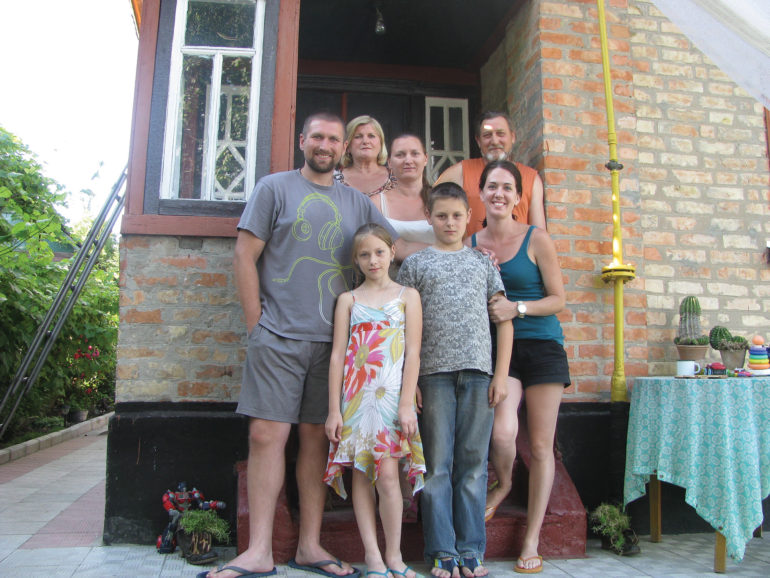 For many Americans, foreign countries remain just that; foreign. With no emotional connection to them, it is easy to take an out of sight, out of mind approach when distant lands are mentioned in international news headlines. Recently, Ukraine has been at the center of media attention as the country continues to struggle with political unrest. For one local couple, Ukraine is not simply just another foreign land. It is the place where their story began.

Mandi Chukin (the former Mandi Scott) grew up in the Jacksonville area and graduated from Illinois College. In 2004, armed with her Bachelors of Communications degree, Chukin began to consider various career opportunities.

“I had gone to a few speeches, given by former Peace Corps volunteers, and knew a couple of people who were serving in the Peace Corps. I began researching the Peace Corps, and decided it was something I was very interested in and applied. I was then invited to join as an English teacher in the Ukraine,” Chukin said.

In October of 2005, Chukin traveled to Ukraine where she began her two years and three months assignment. At the time, more Peace Corps members were serving in the Ukraine, than any other country in the world. The majority of those volunteers, like Chukin, were serving as English teachers.

“Basically, teaching English is the default job for Peace Corps volunteers. Not everyone has a medical background that enables them to provide health care. As native English speakers though, we’re all fairly qualified to teach English,” Chukin explained.

Throughout her more than two years with the Peace Corps, Chukin spent her time in the Western part of Ukraine, teaching kindergarten through 10th grade students. During that time, she also met her future husband, Andriy Chukin.

“In the summer of 2005, I was hired to work as a language cross cultural facilitator for Peace Corps. That’s how I came into the picture,” Andriy Chukin, who was born in Ukraine, said with a smile. “I was the teacher, and she was my student for the first three months, but once she was finished with her training, we began dating.”

The couple continued their courtship for the next two years before becoming engaged, and eventually married. They then moved back to the United States, and settled in Jacksonville, which they both now consider home.

With Andriy’s family still residing in Ukraine, the Chukins began planning a trip to visit them this past November. Unfortunately, during that same month, the revolution began there, causing them to reconsider their travel plans.

“Once the Revolution broke out, we contemplated not going on the trip. Then, the United States put up travel alerts, regarding specific countries that Americans should not currently visit, and Ukraine was listed. At that point it had been five years since we had seen my family. However, we decided it was safest to cancel the trip,” shared Andriy.

Throughout the next six months, the Chukins kept a close eye on the conflict and hoped for peace. This past May the Chukins received that glimmer of hope.

“They held presidential elections in May. The day the new President, Petro Poroshenko, was elected, we made the decision that we would go to Ukraine. Eight days later we flew there, traveled to my parents’ house, and stayed with them. That was the whole point of the trip; we just wanted to see my family. I wanted to give them hugs,” said Andriy.

The two week trip was a very relaxed and peaceful one. The Chukins spent time reconnecting with family members, playing card games and enjoying the beautiful weather. The Chukins also visited the main square in Andriy’s hometown.

“When we went to the main square, there was no longer a statue of Lenin. Instead, there was a Ukrainian flag and a monument for the individuals who had been killed during the protests. It was pretty cool that in my hometown of Smila, that symbol had been changed,” stated Andriy.

“We have family members who live in terrorists captured areas and ones who are active military. We still check the news regularly when something bad happens over there, and breathe a sigh of relief that this time it was none of our family.”