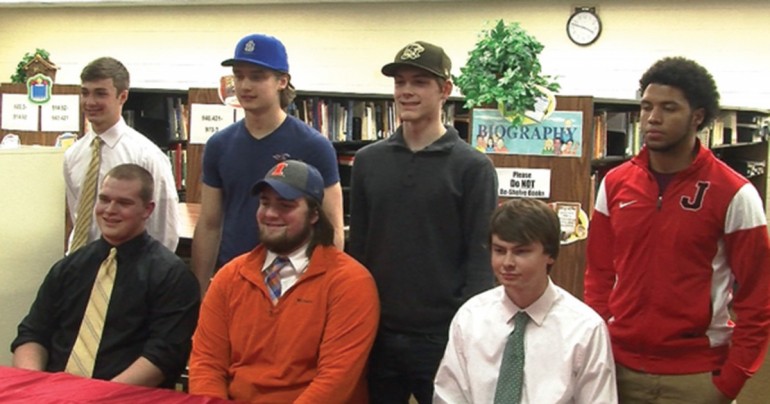 “I chose Ole Miss because I wanted to go to an SEC school because its good competition and I like warm weather! When I walked on campus it just felt like home and I felt comfortable. The coaches and players already treated me like family, even before I committed. They really take care of you when you get there. I really felt like I’d fit in there.”

“No matter where I would’ve gone, I will succeed and I won’t be stopped. I just know I wanted to continue playing what I love to do. But I can’t lie, I do love the water fountain.”

“Quincy was the best place I could’ve ended up. It’s close enough that Carly, my 5 year old sister, can watch me play and I can still be there for her. I really like Coach Bass and all of the other coaches are high quality men and knowledgeable of the game of football. Coach Grounds also had nothing but praise for QU and said it would be a good place for me. Grounds is a good coach, a better man, and someone I definitely have a lot of respect for. His input was definitely a deciding factor. But besides Carly the biggest thing was that I can contribute to building a program while winning games from the get go. I want to be one of the people who get it to the point of championship contention which is definitely possible.”

“[Culver-Stockton]’s coaching staff were all younger coaches, so I felt like they all could relate to the team better. They were all very friendly and seemed like they actually wanted me there. The football program is great. I enjoyed how they do things and I thought I would fit in perfectly in their defense. And the campus is only an hour and half away from Jacksonville, so my parents and other family members can come watch me play, that’s a huge plus for me.”

“I chose Illinois because of the family atmosphere they have their. I feel like the staff would do anything for their players no matter who it is. They have coaches on their staff who have turned programs around and I know this one is going in the right direction.”

“I chose QU for a lot of reasons. I loved the atmosphere of the school. From the soccer aspect, I thought the coaches were very professional and showed a ton of interest in me, which made me want to play for them. Another big part of my decision was how close [QU] was to home, which was great because my parents wanted to come and watch me [play]. I also loved the field and had played on it a couple times in high school. So all of those aspects let me make my decision.”

“Obviously with my brother [Nick Lonergan] being there, that was a big part of it, plus other Jacksonville players like Kody Wood and former players from the Central State 8. They are also getting a new facility, with a new football field, so that was very appealing. I just can’t wait to be a part of a program that is transitioning towards being a top contender not only the Great Lakes Valley Conference but in all of Division II football.”

“I think what led me to choose [NWMSU] was the coaching staff and the drive of the team to win. They are improving a lot of their facilities and getting an indoor practice field which, for a kicker, is a great thing in the cold months. They have the capability of making me a better kicker and increase my success. It is also a place that, if I got hurt, I could still see myself attending college there.”