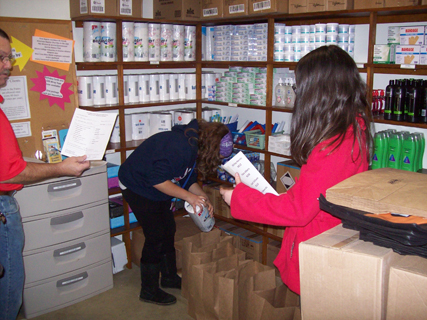 Located on 1701 Mound Road, First Baptist Church of Jacksonville looks like many of the other churches in town – Sunday services, various outreaches, a friendly staff, and a tightly knit, but welcoming congregation. What makes them different? Perhaps it’s the type of outreach that they’re doing – finding ways to meet the obscurely personal needs of people in the community through their Personal Needs Pantry.

Kim Runkle, the founder and director of this ministry, shared that the idea for this ministry was born during the 2011 Christmas season. Each year, the church picks several needy families to minister to. When the church received thank you notes for the gifts given that year, they noticed that each family expressed thanks for the “mundane” items they received – things like toilet paper and soap.

With that, Kim Runkle began researching. What she learned was, in addition to the availability of food stamps, there were dozens of places in Jacksonville offering to feed homeless and needy people. She concluded, “No one in Jacksonville should ever go hungry.”

However, food stamps can’t be used for non-food items. A hot meal is great, but what if you can’t afford personal hygiene items? According to those notes, she said, “people were acknowledging the fact that they needed those items.” 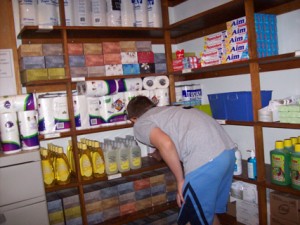 Church members and individuals from the community donated items. Others gave cash donations. They hosted trivia nights and silent auctions to benefit the pantry. Across the community, organizations and individuals rose up to support the work. Kim shares, “We felt God’s hand in this from the beginning, just from the way that it all came together.”

With the help of volunteers, Kim stocked a large closet at the church with cleaning supplies, toilet paper, paper towels, personal hygiene items, and basic first aid supplies. Just weeks after the board approved the idea, Kim and her team of volunteers opened the pantry to the community (June, 2012). Operating from 8:30-11:30am, Wednesday-Friday, the Personal Needs Pantry has served 848 households to date.

Kim shares, “In order to get items, we ask that the client families be referred to us by an agency that is able to perform income verification.” Once a client is referred, they are given products “according to their family size and need.”

It’s hard work, but Kim loves it. When asked what keeps her going, she responded, “The bright spots. The smiles. The hugs…. We operate out of First Baptist Church, but we do this to show God’s love to others. We don’t ask for anything in return.”

For more information on how you can contribute to this wonderful local ministry, go to: www.fbcjacksonvilleil.org