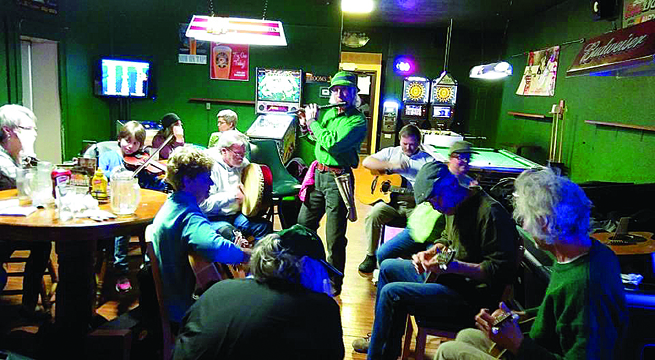 From grade school to the present, music has been a great passionate side gig for one local retiree. Central Illinois has given John Hall many opportunities over the years but a trip to Ireland tops his musical memories.

In 2014 Hall and his wife Krista Hall, who has a strong Irish heritage, took a month-long trip to Ireland. They rented a car in Dublin and chose to drive around the country, staying at B & B’s so they could meet the people. By choosing this form of travel while in Ireland, they were able to see more of the country than most people who choose to do a guided tour.

“I get many opportunities to play country music around central Illinois and occasionally Celtic but didn’t dream to take my drum with me to Ireland,” commented Hall. “I could have played every night in a session while there.” A session is when a group of Irish musicians gets together and plays for a couple of hours.

One night he and his wife went to a pub called Kate Kearney’s in Beaufort, Ireland, to get dinner. This pub was a stop on local bus tours, so they had a house band. During a band break, Hall, who had 20 years-experience playing Celtic music, was talking to some of the musicians and discovered that one of their band members was missing.

The missing player played the Bodhrán, an Irish drum averaging 14–18 inches in diameter, and he was away that night for his daughter’s graduation. The band learned that Hall knew how to play that instrument as well as other Irish percussion instruments: spoons, bones and the Cajón, a box-shaped percussion instrument that the player typically sits on.

One of the band members was able to come up with a Bodhrán and Hall played the rest of the set that night. “We were in Beaufort for two nights. The band invited me back to play with them the second night,” Hall added. “Of course, being a musician, those two nights were the highlight of our Ireland trip for me.”

Back here in Illinois, Hall has had a wealth of musical experiences ranging from rock and roll back in his high school days to country which he got into while he was in the Air Force. He was exposed to the Bodhrán while attending an Irish Festival in Peoria.

Eddie Cotter, a drummer with the Irish band The Kells out of Columbus, Ohio, was doing the demonstration and Hall was hooked. He bought one for himself and he and his wife have remained friends with members of The Kells ever since.

Central Illinois doesn’t offer many opportunities for an Irish musician. “I have played some sessions in the Jacksonville and Springfield areas with the Dappert family from Winchester,” he mentioned. “Before the pandemic hit, I was going to Peoria once a month to play in an Irish session led by the group Turas. Also, a couple of times a month, I traveled to Hannibal, Missouri, to play in a session led by Rag Tag Irish Band.

A few years ago, he attended a Tionol in St. Louis, which is a gathering of Irish uilleann pipe players and other musicians. After the Friday night concert, they broke out into sessions. Hall, along with a man from the Hannibal area, sat down and began playing and before long a total of 40 Irish musicians had joined their session.

“Among the musicians in the session were some well-known Irish greats. Liz Carroll, Paddy Keenan, Billy McComiskey, John Skelton and Pauline Conneely,” said Hall. “It isn’t that often that many greats play in one session, let alone a guy like me gets to play with them.”

Hall is a retired State of Illinois mechanic. For 35 years he would travel the state repairing equipment for IDOT. He and his wife Krista have been married for 50 years and live in Murrayville. They have four children; Gina Edwards, Brie (deceased), Brexton Hall and Aleece Ford. They are grandparents to 10 children.