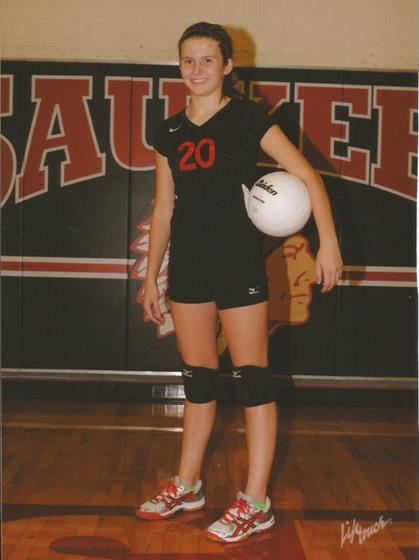 While most teenage girls will be spending their summer hanging out with friends, going to the local swimming pool or going to the mall, one local teen will be training as she prepares to compete on the USA Junior Nationals Volleyball team.

“The USA Junior Nationals program represents a unique concept in volleyball competition, a melting pot for talented high school seniors and underclassmen. It is designed to serve as a gathering point for high-potential young players in an atmosphere of intense competition.”

Anna Geiselman from Pittsfield, will be traveling to Ohio later this summer to compete on the USA Junior Nationals Volleyball Team. She will be on the team comprising girls from four states. Her team will be representing Illinois, Iowa, Missouri and Indiana.

Anna is a sophomore at Pittsfield High School in Pittsfield, IL.  As a Lady Saukee, Anna is the setter for the team. For individuals not familiar with volleyball positions, according to teamUSA.org, “a good setter can make a weak team decent and a good team exceptional. A poor setter can do the opposite…most successful teams, usually have one thing in common: a quality setter”.  Unfortunately for Anna and her team, she missed most of her 2013 season due to a fractured ankle.

Anna’s journey began back in October when she received a letter stating that she had been nominated for the opportunity to try out for the USA Junior Nationals Volleyball team. Tryouts were going to be held on November 17th in Springfield, IL, and registration was a first come, first serve basis.  Anna was determined not to let injury stop her from trying out for USA Junior Nationals and on November 17th, Anna traveled to Springfield and competed for her spot on the team.

On the day of tryouts, Anna joined approximately 40 other teens from Illinois, Iowa, Missouri and Indiana competing for a coveted spot on the USA Junior Nationals team.  The athletes were broken up into 4 teams, each team playing each other with a 40 minute running clock. The girls were given a 10 minute break in between each game. Over the next four hours, each girl played their heart out as each showed off their skills to the coaches in hopes of being selected for the team.  Once the try outs were over, athletes faced perhaps the hardest challenge of the whole experience…the wait.  Athletes were told that they should have a response in two to three weeks. It was in this letter, that they would find out whether they had made the team or not.

Anna found out the first part of December that she was chosen as the setter for the team of eight that would be representing the 4 Midwestern states.  “I am excited because it is Junior Nationals, not everyone gets to go and this is an honor,” Anna said. Anna is preparing for her trip by having an AdvoCare fundraiser. AdvoCare is “a premier health and wellness company offering world-class energy, weight-loss, nutrition, and sports performance products.”

Now through February 18th, all proceeds from order placed online will go towards her trip. “I am excited that we are having a fundraiser that will benefit others and not just myself; I take these products and love them,” Anna said.  Orders can be placed online by following the link provided, www.advocare.com/110810635 .

Lady Saukees volleyball coach, Kate Marable, said, “Anna has the crucial characteristics for a successful athlete – a strong work ethic paired with determination and perseverance. Put that with her natural athletic ability and you have a young female athlete bound for success. The Lady Saukees will be cheering on Anna all the way!”

Besides having an AdvoCare fundraiser to raise money for the trip, Anna has already begun preparation for her week-long trip this summer. “Believe it or not, I am really not nervous about USA Junior Nationals. Right now I am focused on our basketball season. Once that is over, I will be able to focus on preparing for this summer and helping out with volleyball camp.”

Her mom, Rachel Geiselman, said, “we are all extremely proud of Anna and happy for her. We are thrilled she gets this opportunity.”

Despite suffering an ankle injury and only playing for the last three weeks of the season, Anna was able to finish the 2013 season with 120 assists for the Lady Saukees.