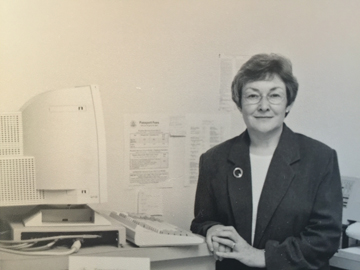 Morgan County Circuit Clerk, Theresa Lonergan, is announcing her retirement beginning with the next term year, the fall of 2016. Though she will continue to serve as the Circuit Clerk of Morgan County for the remainder of her current term, which will end in November of 2016, Lonergan has decided to announce her retirement in correspondence with the commencement of next year’s campaigning season. And while Lonergan has served a total of four terms at her current position – first taking office in the fall of 2002 – her time at the Jacksonville courthouse dates back to when she was only 17 years old.

“Joe Casey, who I’d been neighbors with growing up just south of town, was the Circuit Clerk at the time, back in the 60s,” Lonergan said of how she was first introduced to life at the courthouse. “And one day around 1966, when I was just finishing up high school, he called me and asked if I would be interested in a summer position in his office; and I said that I’d love to.”

Having lived outside of Morgan County for a period of time due to her husband’s military service, the Lonergans moved back to Jacksonville in 1971. And with her former boss, Joe Casey, still as Morgan County’s Circuit Clerk, Lonergan soon found herself back in the courthouse, occupying various positions in the Circuit Clerk’s office throughout the rest of Joe Casey’s retirement in 1988, and on into Barb Baker’s three terms at the the position. Deciding to run for election in 2001, Lonergan was sworn in as the Morgan County Circuit Clerk in January of 2002.

When asked whether or not this position had been a goal of her since her teenage years, Lonergan said, “Honestly, I’d never even considered it before I started working for Mr. Casey. I’ve been really blessed to have gotten the opportunity and to have worked with the people I have.”

When late November comes around next year, Lonergan says she plans to spend her retirement vacationing and visiting with family, which will mostly include watching her grandkids play sports. As far as what she’ll miss the most about the job: “The people, I’ll miss seeing the people that I work with. When you work here, there’s something new everyday.”