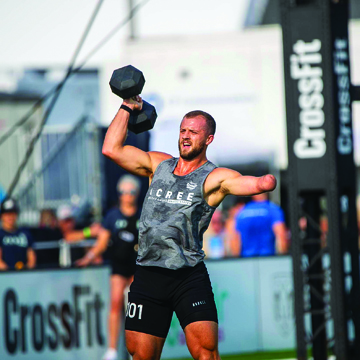 The 2021 CrossFit Games returned to the Alliant Energy Center in Madison, Wisconsin on July 27 – August 1 after an unconventional year due to the pandemic.

Following a few years of discussions, the games added events for adaptive athletes in three divisions: upper extremity, lower extremity and neuromuscular. Competing in the upper extremity and taking home the title of “Fittest One Arm Man on Earth” was Macon County native Casey Acree.

Adaptive athletic competitions started popping up on a smaller scale around 2014 with such events as Wounded Warriors Games and Wodapalooza. The CrossFit Games are the gold standard for CrossFit competition. It can be likened to the Olympics for track and field. Even though there are other athletic competitions throughout the year, the athletes’ sights are always set on the big games. Organizing the skills across the adaptive spectrum to be at the level of CrossFit took some planning and a few years to accomplish.

Born as a congenital amputee, missing part of his left arm, Acree credits his parents for instilling in him the belief that he is no different than anybody else. They taught him that he could achieve anything he set his mind to do. “They are the foundation of who I am as a person and why I value hard work so much,” he comments. “I was an athlete growing up and always fascinated by training and learning how to improve the performance of the body.” Adding drive, ambition and interest in the human body’s performance to his hard work ethic led him to start studying kinesiology in high school. Heading off to college, Acree thought of becoming a strength and conditioning coach at the collegiate level, but then he discovered CrossFit.

After receiving a master’s degree in kinesiology, Acree served as a head coach and manager at a CrossFit gym. “I found CrossFit was not only a great way to train athletes, but to train the general population on how to be healthier,” he adds. His love for personal training on a one-on-one basis eventually led him to team up with three business partners to launch online training in 2017. The business, called Summit Systems, officially opened in January 2020 in Decatur. In-person clientele includes people from all over Macon County and some from Sangamon County. Remotely, he works with clients from Tennessee, Florida, North Carolina, Indiana, Connecticut, Iowa, Missouri and New York. His knowledge and expertise led him to try and qualify for the inaugural competition for adaptive athletes in the CrossFit Games.

In March, Acree entered a qualifying online competition called The CrossFit Open. This competition lasted three weeks. Each week, a workout routine was posted and the athletes had five days to post their video with their score. Each division had their own leaderboard and after three workout tests the top five male and female athletes were given the opportunity to compete in Madison. Hundreds of athletes signed up for the open, but ultimately 30 athletes over the three adaptive divisions made the cut. Upper extremity athletes came from the United States, Ecuador, Puerto Rico and Spain. In addition, adaptive athletes for the other divisions came from the UK, France, Norway, Switzerland, Uruguay, Brazil, Chile and South Africa.

During the games, the athletes were briefed the day before each competition as to what the next day’s events would be. They competed in seven events over the span of three days. Out of the seven events, Acree dominated six of them. Each event covered a combination of skills including rope climbing, exercise bike, dumbbell squats, overhead dumbbell lunges, power snatches, a 4.5-mile run, 300-meter swim, alternating pistols and dumbbell thrusters. “The dead lift and the swim events were the two that gave me the most trouble,” Acree states. “I was lucky that a big portion of the swim event was in shallow enough water that I could run it.” After all events were finished Acree’s score was 655, 165 points ahead of his closest competitor and landing him solidly in the top position. Not only was he a dominant force in the upper extremity division, but one of his students competed in the lower extremity division.

Beth Tanantt, one of his remote coaching students, took the preparation time before the games very seriously. Acree said that he was very lucky that she was a mentally strong athlete. “As her coach, I’m super impressed with her focus, attention to details, ability to pay attention to herself and what she needed to take care of,” he remarked. “To have that mental focus and get the most out of her body multiple times a day on the biggest stage she’s ever competed on is a testament to not only her heart, but her preparation.” Acree’s ability to masterfully compete in his own category to become champion while cheering his student in her division to tie for third place is a testament to his coaching and training skills.

He is often asked why he does all of this and there are three driving forces that keep him going. First, he is very competitive and needs to constantly challenge himself. Second, he knows the importance of competing as an adaptive athlete to legitimize adaptive competition in CrossFit and hopes to create the model on how an adaptive athlete should be preparing. Finally, but on the top of his list, are his wife and two-year-old son. “If she is sacrificing for me to do these things, then I need to give it everything and leave no area of preparation unchecked,” Acree concludes. “I want to be a strong, resilient and capable role model to look up to. I want him to know how hard work and determination can take you far in life. I want to be his superhero.”

Summit Systems, LLC is an individualized fitness center and remote coaching service. They work with individuals of all levels, abilities and goals. The coaches work one-on-one to offer a strong support system throughout their fitness journey focusing on exercise, nourishment and lifestyle.. The gym is located at 4857 E. US Route 36 in Decatur. Their website is www.summittsystems.org and they also have a Facebook page, “Summit Systems, LLC.” Reach them through email at summitsystemshq@gmail.com or phone at 217-791-7590.