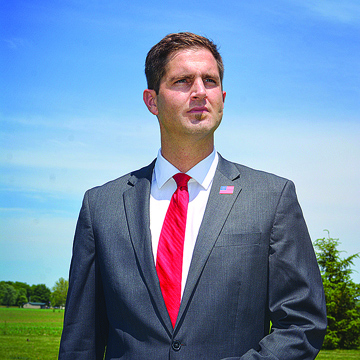 “I feel an obligation to serve my community.” – Tyson Manker

Tyson Manker has submitted his petition for candidacy in the upcoming April 6 Village of South Jacksonville presidential election.

[Editors Note: “The chief executive officer of a village shall be a village president, who may also be called a mayor,” according to Illinois Compiled Statutes (ILCS). Reference 65 ILCS 5/3.1-15-10. Going forward, the term of president and mayor may be used interchangeably.]

Manker, 39, was born and raised in Jacksonville. He says, “living here my whole life and after working with the board and working to clean things up in South Jacksonville for the last six years as an attorney, I feel that at this point in time, I am the most qualified person for the job … I feel that right now is a critical moment for new ideas to really beef up the economy, but also restore the reputation of South Jacksonville.” Manker is also a U.S. Marine and Veteran of the Iraq War.

Manker states, “I feel an obligation to serve my community” as one of the reasons behind his decision to run for mayor of South Jacksonville. He does not, however, plan on being a career politician. “That’s totally the opposite of what I’m about. So, one of my promises out the gate is, if elected, I’ll serve a four-year term and then step aside … I’m all about getting in there, doing the job that needs to be done.” Manker says he hopes that after progress is made, others will be impassioned to run for mayor and continue work to improve the community of South Jacksonville.

“What I want to do, if elected as mayor, is to make people’s lives better,” says Manker. To do that, he has ideas to get the economy going again, grow the economy and restore the reputation of the village. “The people of the Village just want to have the basic services … pick up the leaves, clean the culverts, do street sweeping, make sure that the park is open, make sure that the sidewalks for people who need accessibility don’t have giant gaps in them … those are simple things that because of the current makeup of the board … nothing’s getting done.”

Manker discusses what can be done right off the bat that is important to the people of the Village, saying that anyone may visit his website, www.vote-manker.com, as it lists his initiatives and also gives more information about his viewpoints, background and otherwise. His projects include a Cellular Communications Improvement Plan, an American Flag Landmark Project, the Village Ambulance Restoration and also a Dewey Park — Post-9/11 Veterans & First Responders Memorial. He also states on the website that he will “restore basic municipal services so that residents actually benefit from their tax dollars,” listing the services as road and culvert maintenance, additional leaf pickups, street sweeping and having accessibility to Village codes/ordinances online.

Manker adds, “The Village of South Jacksonville owns 40 acres behind Love’s Truck Stop, so we don’t need to worry about negotiating for easements or anything like that. What I’m going to do is on day one in office, I’m going to start negotiations with the major telecom companies … and we’re going to get some new towers up so we can improve the cellular service.”

Not only does Manker have the cellular initiative planned for the 40-acre field, but also a large amount of patriotic pride – literally. He intends to use some of the tourism money to erect a “massive American flag out there, a 120-foot flagpole with a 30 by 60 flag … exactly, as it turns out, as the one that they’ve got down at Alsey … What I want to do is recreate what they’ve done and make South Jacksonville kind of a landmark on I-72,” essentially adding a giant American flag to the giant red heart. People will remember that. “Pricewise, again, we’ve got a tourism fund … that has been funded over the last several years by all the hotels out there and all the events; we’re sitting on $800,000 plus, so we could easily use $50,000 of it, whatever you want to do, and put up a flagpole and really make South Jacksonville a tourism landmark. It will draw people in. They’ll spend their money on our gas. They’ll stop here as opposed to going on to the next place.”

Another of Manker’s main projects as Village president would be to bring back the ambulance service. Manker believes it was a mistake to defund it. On his site, he writes, “It is an extremely important service that could make the difference between life and death. To save one single life would make it worth the investment. If elected, I will make sure that the Ambulance service is restored and properly funded. I will reach out to neighboring communities like Woodson and Murrayville, who benefit from our Ambulance service but aren’t part of our tax-base, to negotiate a reasonable buy-in to offset costs and increase cooperation with our neighbors. At the end of the day, I feel very strongly that the people of South Jacksonville should have access to our own emergency services, as a public service.”

The final on his list of initiatives is a Post-9/11 Veterans & First Responders Memorial to be constructed in Dewey Park, which is located across from Village Hall and South Jacksonville Elementary School. Manker says the revitalization of Dewey Park is something he’d “like to see come to fruition.” He continues, “Make it into an educational experience for the kids from South [Jacksonville Elementary School] to walk across. We’ll have multiple pillars, and on those pillars or whatever shape – a block, a monolith – tell them a story! On September 11th, we were attacked [as an example] … and then they walk through.” Close to the middle of 2020, then-trustee Greg Nelson had requested Manker prepare a presentation for a Veterans Memorial in Dewey Park. Pro the idea, the board voted to allocate $300,000 of earmarked tourism funds toward the project. However, Manker never heard any more after they first said they wanted to move forward with the memorial at that time. Manker states, “As I explained then, this is a once-in-a-lifetime opportunity for the people of South Jacksonville to show their support for military veterans and first responders.” Moreover, while the giant American flag situated by a glowing heart will be a landmark on I-72, add a memorial like this and a destination is created. People stay longer and visit more businesses, spending more money locally in South Jacksonville. “We’re bringing people in … you want to talk about rejuvenating the economy, so … we would be the first in the State of Illinois, one of the first in the nation, so why would we not seize the day and do this? We could get national attention, certainly statewide … get the Chicago Tribune down here, talk about the little community who is so invested in their Veterans, and they want next generations to learn about that sacrifice that they’re going to put the tourism dollars that they earn … and they’re going to invest in something meaningful.”

Regarding fiscal responsibility, Manker’s stand is, “If we don’t have it in the budget, I don’t want to spend it. The way that I’m going to prioritize funds is to … surely there’s something less important or that’s taking too much money right now that we can start looking at how we’re going to pay for things a little differently.”

Some other objectives of Manker’s include: “bringing back professionalism; making business owners feel confident that they’re not going to get shaken down by a mafia-like corrupt system; having taxpayers able to go onto the website in an easy way to see how we’re spending our money, so that the types of shenanigans that have happened in the past don’t happen again; and giving the taxpayers peace of mind that things aren’t, you know, going to be done how they’ve been done in South Jacksonville anymore – that a new sheriff is in town, so to speak, and we’re going to start doing things the right way.”

Another qualification that Manker notes as bringing to the table is his knowledge of the federal appropriations process. To summarize, Manker shares how he “has experience working with members of the federal government and if elected, [he] would aggressively lobby on behalf of the Village.” Manker adds, “I would be aggressive in seeking out opportunities for not only investments but for federal dollars to come in. You know, the roads aren’t going to fix themselves and if we don’t come up with a 2040/2050 plan we’re going to be holding the bag here in a couple of decades and that’s just unacceptable.”

That work with members of the federal government was part of his work to ensure that Veterans receive benefits or aid they have earned and deserve. On the subject, Manker has also recently published a book on November 29, 2020, titled “VA Handbook for Veterans and Advocates: How to File for VA Benefits and Appeal Your Claim.” Manker states, “There’s no manual, until now, that helps Veterans understand, ‘okay now I’m out of the military and I’m back in the civilian world as they say, and what do I do?’ So, I wanted to share everything that I learned in the process myself because I’m also a combat Veteran, I’m in with VA and I’m very thankful with the services that I’ve been able to receive.” The book can be ordered via VA-handbook.com. Copies can also be purchased locally through Our Town Books. The back of the book offers a four-page poem written by Manker, which he can recite by heart. The name of the poem is “9/11 Masquerade.”

In closing, Manker says, “I want people to know that, like, these ideas that I have, I’m so sincere about this … and everybody that knows me, I’m passionate about the things that I do, and I really want to get this done … why? … going back to your original question … because this is the place where I was born and raised, ’cause my mom still lives there, because my dead ancestors are buried in all the graveyards around the Village … this is my home … no matter where I go in the world, this is my magnet.”

At this point in time, Manker’s running mate is Richard “Dick” Samples.