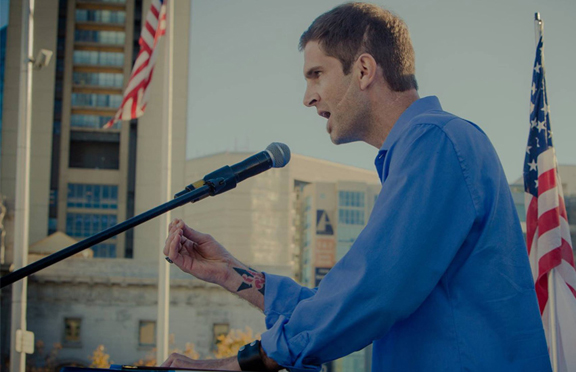 According to his website, votemanker.com, when asked about the opportunity to speak at the National Conference Call on Veterans’ Issues, Manker said that he was “honored to join Representative Gabbard and Colonel Sumner to help spread awareness issues important to Veterans and their families,” and that, as a former combat Marine, he is “all-too-familiar with the ‘true costs of war’ that Senator Sanders so often speaks of.” Continuing on that point, Manker said, “For me, taking care of fellow Veterans is personal. That is why I remain committed to doing my part to ease the transition of those who have served this nation.”

Regardless of one’s party affiliation, Manker’s primary focus is insuring just treatment for all veterans – particularly the number of local veterans – through programs such as AMVETS, the American Legion and the V.F.W., to name a few. So while some – including Manker himself – disagree with certain stances taken by Senator Sanders, Manker’s endorsement of the Senator derives from the Sanders’ longstanding history of pressing for better, more comprehensive care for our country’s veterans.

“The main thing is, we’re not in this uber-liberal bastion, and to come off as this crazy liberal is not a good thing for me,” Manker said, and continued by explaining that for his campaign, he strives “to be more moderate and to focus on the main reasons why I do support Bernie Sanders – which are that he’s incorruptible and he supports veterans.”

Manker continued by saying, “I’m never going to find a candidate that I agree 100 percent with, but the fact that he’s a supporter of veterans, and then couple that with the fact that he is isn’t corrupt. I’ve been asked time and time again, ‘What makes Senator Sanders different?’ and my answer to always go back to, besides veterans, is that he is incorruptible, he can’t be bought off.”

As previously mentioned, Manker himself is a veteran of the Iraq conflict and thus has first-hand experience and knowledge regarding the everyday life of a former soldier. A myriad of recent news stories have revealed the hardships of some veterans – usually ones with discuss the difficulties of coping with Post-Traumatic Stress Disorder and the growing suicide rate amongst U.S. veterans over the past decade. And it is these sorts of issues, along with the policies associated with them, which Manker contains a great deal of knowledge towards.

“Everyone knows about the (Veterans Affairs) scandal where you’ve got secret waiting lists and administrative cover ups that, first and foremost, the only critics, they say ‘Oh Bernie Sanders was in charge.’ Well you don’t have any understanding of how government works if you’re going to blame that on him,” Manker said, then supported his argument by stating, “Before the scandal came out, if you do your homework you’ll see that Senator Sanders introduced a bill, ‘S.1982,’ the most comprehensive veterans’ bill in literally decades, and it was voted down by the Republicans. And then later, the Choice Act was passed, which is still the large bill that him and John McCain partnered up to work on.”

“Fast-forward a few months, and in the aftermath of that, the American Legion gave Senator Sanders their Patriot Award; the VFW gave him their congressional award,” Manker explained. “These are organizations that I belong to, so you’ve got the National Veterans Organizations endorsing this one guy out of Congress saying, ‘Look, no one’s got our back like Bernie Sanders.’ It’s not just me saying it, it’s the VFW … the American Legion. One of the most important human characteristics, to me, is loyalty, and when someone goes to bat for me, I’m loyal to them in return.”

Further details regarding Senator Sanders’ stance on veterans, Manker has included some of the key examples, such as the bill S.1982 – a comprehensive bill introduced in February of 2014 that would have dealt with veterans’ health and benefits and restoration of military retirement pay – as well as the Choice Act of 2014, on his website at votemanker.com.

Yet while he has had the opportunity to voice his support for veterans and Senator Sanders’ stance on veterans’ affairs, Manker has continued to run his own campaign for the office of Morgan County State’s Attorney. When asked about the progress of his own campaign, Manker said, “It’s exciting. I’ve had nothing but fun so far because I enjoy getting out there and talking to people about some of the problems that I see. And so often, when I speak my piece or I listen, and we’re in agreement on so many of the same things. Plus the fact that we’re going to get back to equal justice under the law. So that and some of the initiatives that I’m really excited about putting into place, like the Veterans Treatment Court, which I think is going to be a pretty big deal.”

For more information on Tyson Manker and his campaign, please visit his website at votemanker.com.