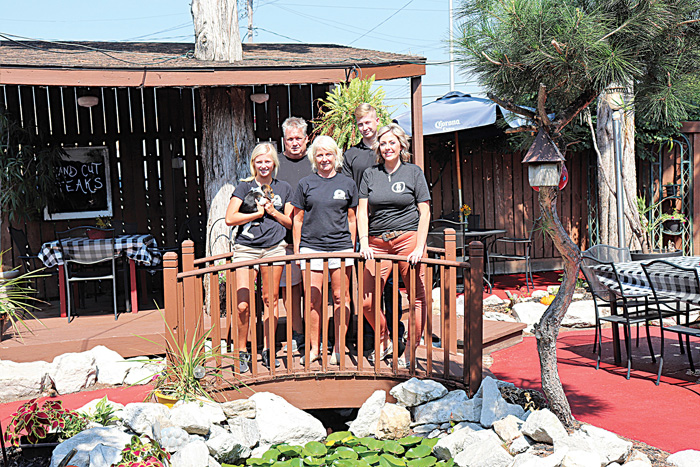 The Schierls are personally celebrating their 20th anniversary in November but have been together for 30 years. They first met when Mark managed a company called Comtech and Sherry worked for him.

Mark Schierl was in the utility business and along the way, he joined the team at the Illinois Power Company. When he was hired, a new employee at that time would fill out a form stating his or her goals in life. Schierl enjoys the memory, saying, “I will never forget that. What I put was that I would love to be entertaining people – cooking and entertaining people. That was my goal in life because I enjoyed it! My mother is an outstanding cook, and I like to cook, so I learned from the best. It was in the back of my mind for a long time. I also like building, and with all the restaurants … my friends and I have built from the ground up. I have some good friends and they’ve taught me a lot.”

The Schierls began their restaurant business with Muggsy’s in March 1999, while Mark Schierl was still working for Illinois Power. “My mother and father originally helped me out a lot with the food and choices and our menu was mainly steaks and some fish,” explains Schierl. “As we got busier and busier, we knew we needed to step it up, so we hired a local chef, Benjamin Ford. He took us to the next level – to a better dining experience – and he stayed with us for five to six years. I came back over for a while, but we had gotten to such a level that I wasn’t comfortable, so we hired another local chef, Richie Fredericks, who he is now at Lonzerotti’s and we remain friends. Today, we have a good chef in Eric.”

“Muggsy’s was actually named after one of our dogs,” Schierl said smiling when asked how he came up with the name of his first restaurant.

During his many years at Illinois Power, he spent time driving back and forth to other cities for work, all the while continuing to live in Jacksonville. In 2004, Ameren acquired Illinois Power Company, so Schierl decided to retire rather than move his family to St. Louis so he could spend more time with them.

Their children are Brandy Lomelino, who has worked at their restaurants over the years, but now has a career of her own as marketer and admissions coordinator for Prairie Village Healthcare; Tommy Schierl, who runs Brickhouse and other restaurants as needed; and Lacey Schierl, a senior at Routt Catholic High School, who helps out with the restaurant in a variety of ways.

“When I started, I was hoping to get into a couple of restaurants, but not four or five,” laughs Mark Schierl as he looks back at their beginnings. He started building another restaurant in 2005, opening the Brickhouse, 49 S. Central Park Plz. in 2006.

“I thought I wanted to get into barbeque,” he remembers, “because it was getting huge at that time and there was no one else in Jacksonville to compete with then … and, of course, everybody thinks they are great at backyard barbeque. I was in the kitchen at Brickhouse for two years.”

“We own all of our buildings except for Schiraz,” he says. “I got to know Mrs. Becker and that was her dad’s first bank. She asked us if we’d be interested in it, and we jumped at the chance because it is a gorgeous building. We had very little to do inside it when we began in 2012. We went for Panera Bread-type atmosphere for lunch because Jacksonville was hurting for a healthier version of food.”

“We change up the menus in all our restaurants about every six months to keep them fresh. We also try to remodel each of our restaurants every five years,” reveals Schierl. Muggsy’s has grown a lot over the years, for example, from seating 22 people to currently seating 200 when including both the upstairs and outside. “The kitchen has also moved to a completely different area and we have built onto Muggsy’s seven times,” he says proudly.

With all the growth, there have been rough times. “When we had the flood in Jacksonville and the water treatment plant flooded, it just about broke us. You couldn’t serve fountain sodas without water. Without water, you can’t run your dishwasher … you can’t do anything! It was terrible! We had to boil our water to cook anything. I was thinking about going back into the utility business, but fortunately we were able to stay open. Tommy was young and helped haul tanks of water and would go to Springfield or White Hall to get ice every day!”

They have, once again, remodeled Muggsy’s inside and out. The hidden, back garden area is serene with several beautiful water features. Tommy and Mark Schierl even installed a bocce ball court in the back in June 2019 using some old Illinois College (IC) football field turf.

Tommy Schierl said, “We also just gutted the walls, repainted everything inside and out, updated TVs, brought the pool table in, reorganized, and put in the slots at Brickhouse in January … and are currently working on a new menu.”

“We had a rough year last year,” explains Mark Schierl, “and Tommy was going to college locally and helping me out. I was thinking about closing it and Tommy mentioned, ‘Well, let me have a try.’ He and one of his friends, Taylor ‘Kirch’ Kirchhofer, the head manager, have turned it around. The new seating area inside is called ‘The Den.’ It’s all his now; I don’t go over there at all now unless there is an emergency. He gets the younger generation and that’s what we needed.”

They have added things like “Wing Night Wednesdays” and drink specials. Tommy Schierl has plans for the back patio this fall or next summer. Plus, in October the Brickhouse started opening up for lunches Tuesday through Saturday.

Mark Schierl says, “I’m in my 50s and out of the loop, so I sent these young guys to one of the greatest places that you can go for trends, The University of Wisconsin in Madison. It’s the testing ground for a lot of beer distributors and things like that. They went there to study what is hip right now.”

He said it is important to them to thank this community and surrounding communities for their patronage and support over the years. “There’s a lot of good in this town,” he says proudly, “and I want to mention the other local spots because we are all part of the same group of local businesses that people should support and take advantage of having so close … I just hope people remember these are local people and local employees. It’s hard for all of us to survive and we want people to appreciate the fabulous local restaurants and know that we appreciate our customers!”

“We’ve entertained movie stars, governors … professional athletes like Kenny Norton and friends here. IC and MacMurray colleges have always been great to us,” he says. “We can support group events such as rehearsal dinners, showers, small weddings, Christmas parties, birthdays, ball teams during tournament weekends, college groups, teacher groups and more … and we always want to know what the public thinks. We listen and change as we hear from our patrons.”

Family means a lot to the Schierls and that includes their staff. “We have over 80 very good employees who are definitely a part of our family. They all pitch in and move around to our different locations when we need them to. We go to their weddings and graduations and if their kid is sick in the hospital, we go, because we do care about them and they care about us and we appreciate that.”

“I’ve learned not to worry about competition,” Schierl adds. “You have to worry about what you are doing and keep your business up. You can’t get stale. You have to keep changing with the times and the new generations. We just hope we can give people good quality meals and that they will choose to come here.”

The Schierls have continued to believe in Jacksonville and appreciate Jacksonville believing in and supporting them. “It is a great community,” concludes Mark Schierl, “and everybody supports everybody. Restaurants support each other here and that keeps everybody local, so they don’t go elsewhere.”

So, come eat, drink, celebrate and enjoy with friends and family at the delicious local restaurant choices in town.