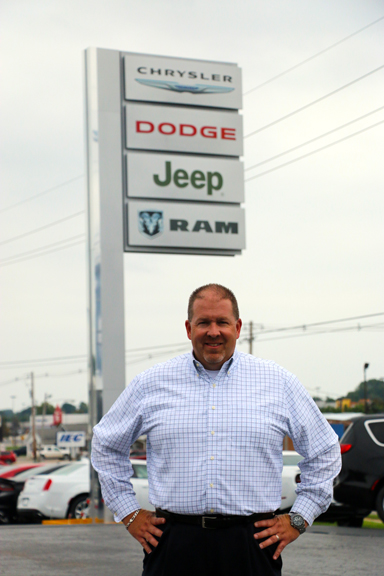 ”It’s not my thing to talk about myself,” said Chad Tullis. In all honesty, he’d prefer to talk about cars. But in becoming the new owner of Jacksonville Chrysler Dodge Jeep Ram, he has to step into the limelight a bit more.

It sounds like a big change for a dealership to get a new owner, but for Tullis and his team this summer, things have gone super smoothly.

Around July 1, Chad Tullis transitioned from being the general manager to the owner of the car dealership that’s “just down the road from higher prices,” as their website says, or more concretely, the dealership located on 1600 West Morton Avenue.

A veteran of his trade, Tullis has years of experience in car sales from working for Gary Jarvis since 1994, and having been the general manager of the dealership for the past 11 years – some facts that definitely account for the smooth transition that has occurred.

Tullis shares, “With any change, there are usually some new ideas that the new owner has.” But for now, he states that there will be “nothing immediate as far as changes – mostly all the former employees have stayed on.” Having been involved in the hiring process for many of those employees, he knows the team well and feels that they have a “have a very good group” currently running the dealership.

Looking ahead, Tullis did say that, “Our plans are to grow, add some more employees over time.” Other possible changes would include some technology upgrades and branching out to use some technological tools that the previous owner did not leverage too much.

But looking back over the transition earlier this summer, Tullis says, “Day-to-day operations are much the same. A few more people come to me for answers. Really, nothing has really changed. I’m still very much involved in working deals and making decisions for the service department.”

In summary, Tullis says, “Hopefully, everything that we do will be positive and help us to grow, and benefit the community.”