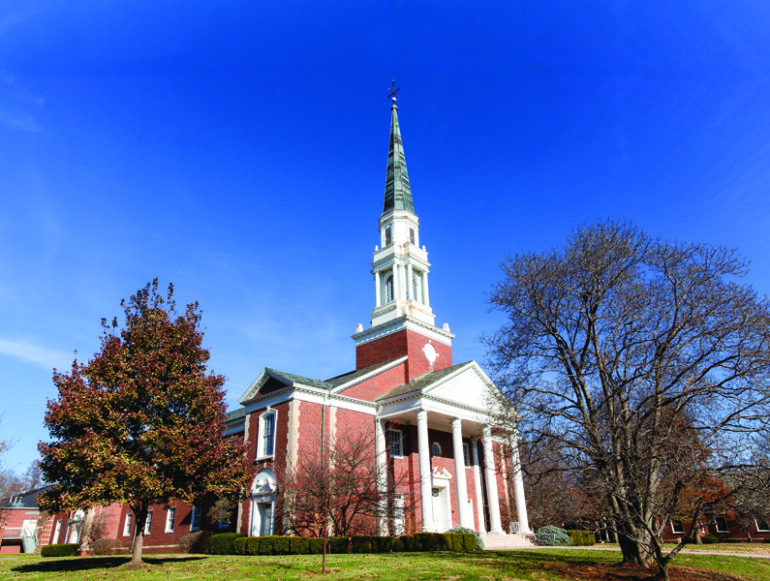 When Dr. Clarence P. McClelland began his presidency at Illinois Women’s College in 1925, he wanted to follow the ambitious plan his predecessor, Dr. Joseph Harker, had laid out.

Expanding the curriculum and the campus were top priorities for McClelland and the board of trustees, under the leadership of former Illinois State Senator and wealthy businessman James MacMurray. Due to his financial generosity, the school honored MacMurray by renaming the school to MacMurray College for Women in 1930.

Over the course of 15 years, the college added two residence halls (Jane and Ann Rutledge), McClelland Dining Hall, MacMurray Science Hall and Henry Pfeiffer Library, all during the Great Depression.

As the campus population grew, the school began to run out of room to hold their weekly chapel services. For a time, the services were held nearby at Centenary United Methodist Church and then six blocks away at Grace United Methodist Church. However, the safety of 700 students walking to Grace for chapel every week became a concern.

Annie Merner Pfeiffer, who had previously donated $100,000 to build the Henry Pfeiffer Library, pledged $125,000 in 1944 to help build a new chapel if other friends of the college would give $75,000. A Citizens Committee endorsed by the Jacksonville Chamber of Commerce was formed with a goal of $50,000 and a call to action was given to the Illinois Conference of United Methodist Churches, who eventually gave more than $100,000 toward the building of the chapel. The administration and faculty pledged $10,000 and alumnae donated $30,000 to provide an organ. Unfortunately, Annie Merner Pfeiffer passed away on January 8, 1946, and she was never able to see her dream become reality.

Due to World War II, construction was delayed for the chapel as well as one additional building. Shortly after the war, the construction of both buildings began. The new addition was a dormitory named Kathryn Hall, named for Sen. MacMurray’s wife who was currently serving as president of the board of trustees.

The construction for the chapel began in 1948 with the laying of the cornerstone on October 8. The plans for completion were to be sometime in 1949. At a cost of nearly $500,000, the chapel was finally dedicated on December 11, 1949. Annie Merner Chapel, named after its generous donor, sits on the corner of College Avenue and South Clay Street. The front of it faces south, gazing upon the front of Pfeiffer Library. The only thing that separates the two buildings is College Avenue and the Rutledge lawn. It was agreed that there were to be no permanent structures built between the two buildings.

Inspired by the meeting houses of old New England, the Georgian design has an imposing entrance featuring white columns backed by a steeple rising 140 feet. Inside the entrance, visitors have a stairway to the left and right that lead to the balcony that surrounds the entire auditorium. The seating capacity of the chapel is 1,200. Probably the most impressive interior feature is the chancel area, designed to hold a 70-person choir with eight iconic columns serving as a very impressive backdrop.

In the northwest corner sits the DeMotte Meditation Chapel, given in honor of William D. DeMotte, president of the college from 1868-1875, by his family. Other notable donations include the pulpit, the lectern and the altar furnishings by Reverend McKendree Blair, professor of religion. The Bible on the altar was given by Mr. and Mrs. George J. Carpenter of Jacksonville in memory of their daughter Alice Ada, Class of 1944. She gave her life for her country during World War II. Ultimately, the Aeolian-Skinner four-manual organ was built in the chapel in 1952 and was provided by alumnae of the school.

Pomp and circumstance surrounded the dedication ceremony which would be the beginning of many events that would take place within its majestic walls. Dr. Henry Noble MacCracken, president emeritus of Vassar College, was the principal speaker during the ceremony. Odis C. Poundstone, the chief architect, presented the keys to the chapel to the board president, Kathryn MacMurray, who then presented them to MacMurray College President McClelland. United Methodist Bishop J. Ralph Magee led the congregation in the statement of dedication and prayer. The scriptures were read by Professor Blair. The college choir, under the direction of Henry Busche, sang “The Lord is My Light,” by David Stanley Smith. The pianist Hugh Beggs offered the processional and recessional. The altar area was adorned with many floral tributes provided by the many firms and contractors involved in the building of this magnificent structure.

When the organ construction was completed, there was a dedication recital held on October 10, 1952, by MacMurray organist Catherine Crozier. Crozier and Dr. Robert Glasgow, MacMurray College music professor from 1951 – 1962, were instrumental in bringing the organ to Jacksonville.

One last gem, added to the chapel in the late 1950s, is the Steinway grand piano. Steinways have been present on the campus since 1875, but what sets this one apart is its origins. The piano was selected for the college by the world-famous concert pianist Van Cliburn. He played the instrument and signed it before being shipped from New York.

Over 71 years, Annie Merner Chapel has been the home to many legendary performances and speeches including Fred Rogers and legendary blues guitarist B.B. King in the 1970s. The Fellowship of Christian Athletes and Christian Radio WIBI have hosted many concerts including Susan Ashton, Steve and Annie Chapman, Ray Boltz, and Wayne Watson, to name a few. When Sparrow Records came to town, they hosted Steve Green in concert at Annie Merner.

The chapel saw a lot of new beginnings, from the many weddings held throughout the years to the start of the college careers of so many alumni. Every May, the bagpipes would lead the next graduating class across Rutledge lawn from Pfeiffer Library to receive the long-awaited diploma on the stage of Annie Merner.

Annie Merner Chapel will always be associated as an iconic landmark of Jacksonville and the memories made there will last forever.