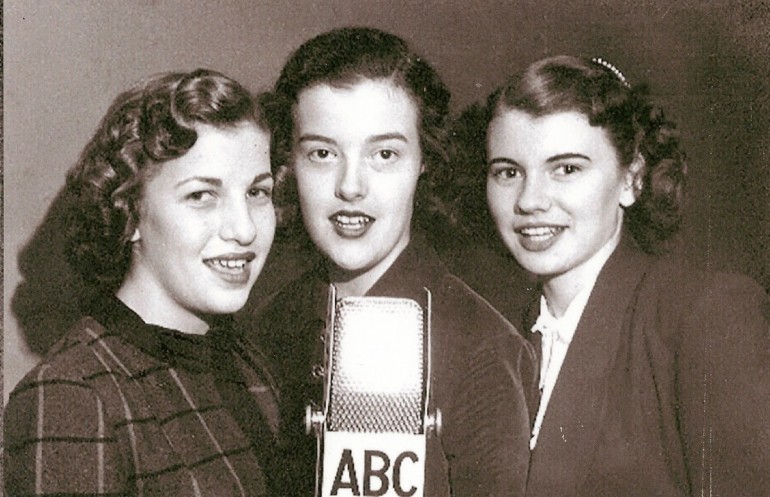 A small-town girl from rural Winslow, Ind., got a chance to see what the bright lights of Chicago had to offer in 1949. For Sally Sue Brown, now Ezard, her love of singing landed her and her trio, ‘The Rythymettes,’ in Chicago with an appearance on the Morris B. Sachs Amateur Hour. The program gave a chance for dreamers of all ages to possibly be the next big radio, stage or screen star. Skip Farrell, Adele Scott, Frankie Lane and June Haver, are just a few of the famous celebrities who got their start on the program. When ‘The Rythymettes’ opportunity became available to appear on the program, they were attending high school.

Ezard, a freshman at the time, was the youngest of ‘The Rythymettes,’ and Lenore (Vinyard) Bechtel and Nina Fiscus, were juniors. The trio had been singing at Winslow High School together and won many musical contests. Bechtel’s Aunt Isabel in Chicago was the one who came up with the idea for the girls to appear on the Morris B. Sachs Amateur Hour. There were two rounds in which the trio participated. Not only did the girls get to sing on an ABC radio station, but they appeared on television, as well. The first round, ‘The Rythymettes’ won based on judging. During the second round, the trio faced judges again, but this time the number of postcards the public sent in letting the judges know which contestant(s) they liked the most, also determined the winner. The trio placed second behind an Elvis impersonator musician.

Ezard believes that if they had not changed into fancier outfits for the second round, she and her trio could have won. During the first round, the trio wore bobby socks and saddle shoes. “I still think if we had been bobbysoxers, we would have beat that kid,” she said.

The trio received $75, one Gruen watch and an orchid apiece for placing second on the Morris B. Sachs Amateur Hour. Ezard still has her preserved orchid and the watch, which her father, Neal Brown, kindly bought on her behalf from the other girls. “It gave me a lot of confidence in myself,” she said. “I’ve always loved music, and I wish I would have gone further.”

During one of her high school summers, Ezard and her trio also sang a Coca-Cola jingle on the local radio station in Winslow. The merchants and Bank of Winslow on Main Street sponsored the ‘Coca-Cola Time.’ Tiny Craig, a fellow senior student at Winslow High School, accompanied the trio on all of their performances.

Singing at church is something Ezard continues to enjoy. She started singing around the age of 11 or 12 at the Winslow Methodist Church. A couple of her favorite songs are ‘His Eye is on the Sparrow’ and ‘Jesus, Jesus is the Sweetest Name I Know.’ Ezard has sung as well with the local Central Christian Church Choir. Every Christmas Eve, she sings a solo of ‘O Holy Night.’

Ezard met the late Roger Ezard while teaching in Franklin, Ill., in 1961 as a first grade teacher. Roger also taught school and coached. The couple married in 1963 and moved to White Hall, Ill. Finally in 1965, they moved to Jacksonville, where they built their home. She retired in 1994 from Washington School where she taught third grade. “I have taught all grades,” she said.

The couple have two sons, Mayor Andy Ezard of Jacksonville and Tony Ezard in Kansas.

CUTLINE: ‘The Rythymettes,’ from left to right, Nina Fiscus, Lenore (Vinyard) Bechtel and Sally Sue (Brown) Ezard performed on the Morris B. Sachs Amateur Hour in Chicago in 1949. The trio cut a record with a song called ‘Lucky Ole’ Sun’ by Frankie Laine.