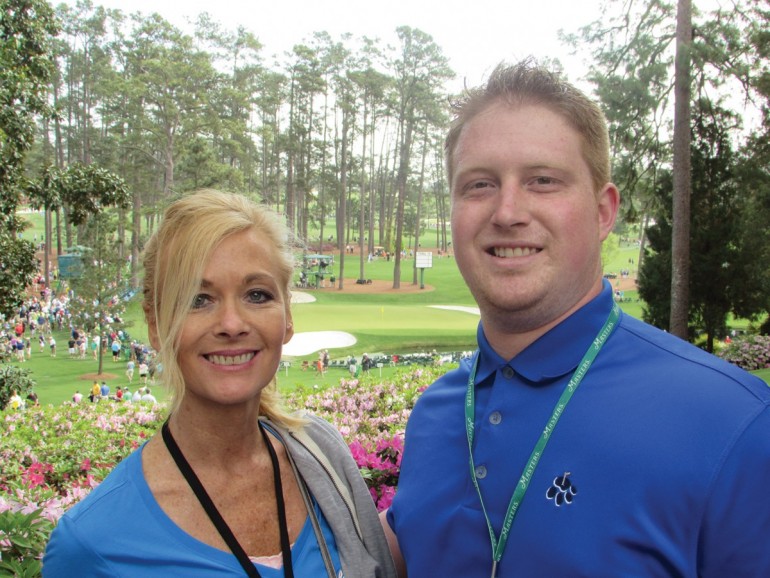 I get mixed reactions when I tell people that my dad has attended The Masters every year for the past decade. Most golf fans, from the casual to the die-hard, give responses that range from envious to excited. Non-golfers either pretend to know what I’m referring to with a polite smile or just shrug and change the subject. Whether you’re familiar with The Masters or not, just know that it’s not something everyone gets the opportunity to attend even once in their life. My dad is pretty fortunate. 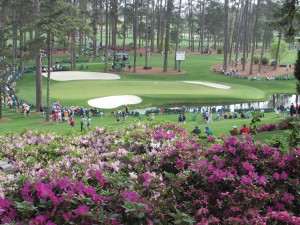 Located on the border of Georgia and South Carolina, Augusta National Golf Club is considered among the most prestigious golf courses in the world. Each year, during the first week of April, Augusta plays host to The Masters, the biggest professional golf tournament of them all; the Super Bowl, the World Series of golf. Win The Masters, and your name is etched in history among the greatest of all time.

Between the practice rounds on Monday, Tuesday and Wednesday, and the tournament rounds from Thursday to Sunday, hundreds of thousands of spectators walk through the white gates at Augusta National to watch the world’s greatest golfers. This year I was lucky enough to be one of those spectators. It was my first time at Augusta National, but with my dad having gone each of the last ten years, I had a good idea of what to expect.

The best way I can describe the actual course itself is by saying that it feels more like a fantasy land than a real, tangible thing – imagine King Louis XIV surrounding the Palace of Versailles with fairways and par-3s rather than gardens and chateaus. Although it sits in the middle of Augusta, GA, a city with just under 200,000 occupants, Augusta National is not something that one can simply drive by and catch a glimpse. Completely blocked off from the rest of the world by thick brush and sky-scraping tree branches, the course is only seen by club members, ticket holders, and the occasional helicopter pilot. Passing through the entrance gate felt like stepping through a time-space continuum; golf’s version of Narnia.

Each blade of grass stands perfectly upright, having just received more of a pedicure than a fresh cut from a Cub Cadet. It’s as if your feet are the first to have ever touched the grounds. Seriously, as soon as entrance is permitted, dozens of spectators stop to take pictures of just the grass (just the grass!). I could’ve taken pictures of the course all day and night and nothing would have done justice to what I was actually seeing with my own two eyes. Each hole is uniquely named after the tree or shrub with which it has become associated – Tea Olive, Pink Dogwood, Camellia, Azalea, Yellow Jasmine … you get the idea. There is an entire section, not accessible by the general public, known as “the Nursery,” which operates specifically as an area for new trees and plants to grow (under what I imagine to be special attention from professional horticulturalists). And then, of course, is the world-famous “Amen Corner,” considered by most to be the three most beautiful golf holes in universe, consisting of the 11th, 12th, and 13th holes – again, words hold no value over first-hand experience.

Now, what you’ve just read might seem like an exaggerated diatribe regarding the intoxicating nature of Augusta National’s physical aesthetics. In truth, it was more of an understatement. I could go on, but I can sense my non-golfing audience nodding off in their recliners.

Every square inch of land is demarcated with white ropes and white fences that require no sign to specify who and who isn’t allowed to cross them. You’d have better luck trying to gain entrance to the oval office than you would trying to access certain places at Augusta. Not that I tried, or would ever suggest doing so, but you get the picture. Note to the millennials: there are absolutely NO CELL PHONES allowed through the gates at Augusta National, none, so you’ll just have to overcome that nervous “check my phone every 5 seconds” habit. So, as you could imagine, the weekend of The Masters requires myriad security, which is where my dad comes in.

Obviously, the hundreds of thousands of spectators greatly outnumber the forty-or-so golfers that receive invites to the weekend tournament. And while some holes have grandstands from which people to sit and watch, the majority of spectating happens on foot, following one’s favorite golfer up and down the (ear-popping) slopes of the course. Fans surround all tee-boxes, standing literally feet away from millionaire athletes, with only the ropes preventing them from pulling a “Mark David Chapman.”

In order to combat this athlete-spectator imbalance, The Masters employs hundreds of security guards from all walks of life, not just the barrel-chested bar bouncers you see in cartoons and reality TV. Essentially, the only qualifications you need to be a security guard at The Masters is the ability to fill out an extensive online application, and perhaps a few connections to someone currently employed. And as it turned out, back around 2005, my dad, Kai Schnitker, – being the socialite he is – happened to know a guy who’d been working security for years and was now looking to retire. 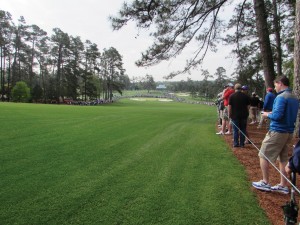 Photo/Special to The Source Newspaper
A shot taken from the fairway of Hole 2 at Augusta National Golf Club.

My dad not only jumped at the opportunity, he sprang – a lifelong lover of golf being offered a security guard position at the most alluring golf course ever constructed … his answer was an emphatic yes. I was 14 years old the first time my dad went to The Masters, and while my golf game is what you would call “not very good at all,” I was keenly aware of the sports’ biggest stars. Initially, my thoughts were “hmm, that’s cool, my dad will get to see the mecca of the golfing world. Maybe he’ll even get to meet Tiger Woods or Phil Mickelson.” What I didn’t realize is that my dad would actually be standing right next to those guys, moving back eager spectators to make room for tee-shots that found the rough.

Very soon I would see not only my dad, but my uncle (my father’s brother), sitting green-side during a Tiger Woods’ putt or a Bubba Watson chip. I’d flip on ESPN or NBC and bam, there they were, an arm’s length away from the greatest golfers on the planet. The coolest moment involving my dad at The Masters came in 2005, the first year he got to attend. As the tournament reached its final round on Sunday afternoon, Tiger Woods held a commanding 7-stroke lead with 18 holes to play. (And guess who was on Tiger’s security team that day.) As Tiger strutted stoically to the 18th and final hole, – with the Georgia sun beginning its descent behind him – the CBS cameras began a slow motion shot of the soon-to-be champion as he climbed the final hill. Perfectly centered in the high-definition frame, there they were, Tiger Woods in front, my uncle over his left shoulder, my father over his right – captured for eternity in the epochs of Masters’ history. 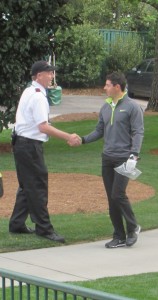 These past few years, my dad has been following up-and-coming superstar Rory McIlroy, who entered the weekend as the #1 golfer in the world. As he got the radio call telling him that McIlroy had arrived, my mother and I began making our way over to the practice range. My dad and uncle were let through a gate after flashing their credentials to yet another security worker, standing on each side of a sidewalk as a large Mercedes SUV approached. As the doors of the Mercedes opened, out came Rory, lean and fit, with his signature smile from ear to ear. And just like it was any other day, Rory and his caddy approached my dad and uncle, shook their hands and exchanged casual greetings – Rory with his signature Irish accent. There was my dad, shaking hands with the best golfer in the world. We followed McIlroy around all day. While we were on vacation, McIlroy was at work, never breaking focus despite the thousands of fans – many of them being physically attractive females under the age of thirty. Essentially my dad’s job is to protect the golfers from the fans, and see to it that they are as comfortable as possible throughout their round. For example, walking down hole 6, Rory McIlroy had just finished his morning banana. With no place to throw away the peel, my dad extended his hand as an offer. Yes, Rory McIlroy handed my dad his banana peel. Remember when I said my dad was lucky?