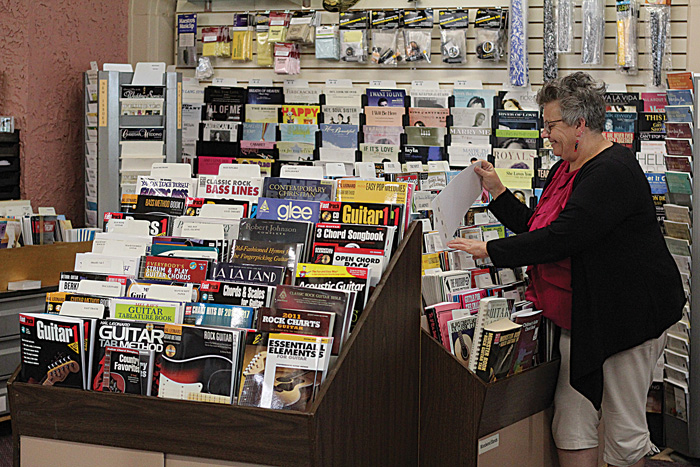 From my days as a young musician, peering over the counter at Mr. Boyd artistically adjusting his band instruments, to peppering Miss Roberta with questions about all the sheet music I ever wanted to play, I can honestly say that Boyd Music shop on Main Street in Jacksonville was one of my favorite places to go growing up. Plus being in a family of musicians, Mom took all of us kids in there — a lot. We’d file in and file around … looking learning, and loving the feel of everything — the beautiful arches over the work desks, the shimmering horns and stringed instruments hanging on the walls, the pianos we could admire, the books we could touch and … the expensive and big-time drum sets that we could NOT touch.

This August begins a new chapter for Boyd Music and its employees — a chapter where Craig Boyd can continue his tradition of excellent instrument repair, but without the front of the retail shop that so many local musicians like myself have loved for so many years.

For 65 years, the Boyd family’s tradition of music has benefitted Central Illinois. In 1954, Bob Boyd opened their first music store in Rushville. With that, Craig Boyd grew up in a house where frequently on Sunday nights, his dad’s 18-piece dance band rehearsed in their living room until late while with his dad, a fabulous clarinetist and saxophonist played the lead. While the band played on, young Craig and his siblings skipped sleep and learned to love the music of the ‘40s, and anything big band.

Craig Boyd grew up with a knack for music and instruments just like his dad. In 1974, during his senior year in high school, his dad opened the music store in Jacksonville. With that, Craig Boyd made some fast moves. In 1975, he graduated from instrument repair school in Wisconsin and returned to Rushville to work alongside his dad in the music business. Four years later, he married his high school sweetheart, Brenda, and moved to Jacksonville … where he’s been for 40 years. The rest, as they say, and as countless Central Illinois musicians will attest, is history … good history.

After servicing musicians at two other Jacksonville locations, Boyd Music moved into the 426 S. Main St., and for 21 years, that store has been THE place for local musicians. From rentals and repairs to upgrades and supplies or sheet music of all types and so much more, Boyd Music has served local musicians well — with integrity, value and service — factors that Amazon and eBay can’t always match.

Not just the place to buy, it’s also the place musicians go for help of all sorts. Any local band students know the feel of sheepishly walking into the shop and handing over a horn with a jammed mouthpiece, an oboe with a swab stuck in it, and more. Speaking of oboes and stuck swabs, Boyd doesn’t just repair his instruments; he can invent repair tools to accomplish artistic means. He says, “Thirty years ago, I made a special tool to remove swabs from oboes. I’m still using it today.” Even after repairing for 45 years, he says, “I’ll still get some things occasionally that come as a surprise, and I love finding a solution for them.” He laughed about the time he was cleaning out a sousaphone and a tuft of white feathers came piling out. He said, “I thought it was a dead bird!” But further examination proved that it was a plume from a marching band uniform.

Boyd chuckles, “Around the shop, we all joke about instrument emergencies. They’re just instruments, but when a concert’s coming, it’s crucial — musicians have got to have their instruments fixed right now!” He finished, “We can accommodate immediate repair, and if we can’t, we just loan them an instrument. Those people, I’ll still be here for them.” Forever and always, Boyd has a generous policy for brass players. He says, “I’ve never charged for pulling a stuck mouthpiece out of a horn, but I will charge if I have to repair the damage if they tried to force it out first.”

A huge part of the action at Boyd Music happened on the road. During the entire school year, members of the store team would drive over 700 miles a week, calling on schools from Carlinville to Warsaw and everything in between. Boyd’s wife, Brenda, and his sister, Mindy Crum, made that aspect of the business work. Craig Boyd shared, “When the schools needed anything, special pricing and special visits, Mindy answered those calls, visited those schools and made things work from the inside.” Even with the coming changes to the retail side of things, Crum will continue to do bookkeeping from her home. Brenda Boyd too was amazing, too. Since retiring from her teaching career in 2011, she has spent countless hours on the road visiting schools and in the store freeing Craig Boyd to do what he loves — working on repairs. Whether it was picking up instruments, dropping them off or just checking in to see how the schools were doing, she did it well – with an honest smile and a heart for the people she served. Recently, Angela Dunnagan worked with Crumm and Brenda Boyd, helping make sure that the local schools had what they needed to run a good music program.

On the retail side of things, there was no one like Roberta Overby. The kind voice behind most of the phone calls, the capable mind that always knew one more source to check for that obscure item or piece of music, and the smile that left you thrilled with your service experience — that was Roberta Overby. For over 20 years, she created the outstanding retail aspect of the Boyd music brand, leading Craig Boyd to say, “She’s the most dependable we’ve ever had in that area, and the one I count on when I need something done.”

Over the years, Boyd had his faithful people in the repair shop, too. He mentioned a few of them — namely, David Corbridge, Keith Altevogt, Bill Cox and Mycah Cannon. He mentioned those who had most recently worked, saying, “Bill … a super honest man, I can trust him forever, and he’s my go-to on brass instruments.” Also excellent in guitar setups, Cox will continue doing some repairs in the shop with Boyd, plus, he will continue teaching guitar in the store on weeknights. Cannon was an instrumental repair prodigy of Boyd’s — a young girl from Palmyra whose skill on woodwind instruments freed Boyd to leave her in charge of that aspect of the shop for Boyd and his wife to enjoy their first long vacation ever in 2016.

As the retail runs some engaging sales and they prepare to transfer remaining inventory to The Music Shoppe, Inc., with headquarters in Normal, Illinois, Boyd shared thoughts for his customers, saying, “I could conceivably see myself doing repairs here for another 20 years, on my schedule.” Just like in high school days, Brenda Boyd will be by his side to answer the phone and keep things going smoothly. She’ll invoice things like the Boyds have always done. Craig Boyd shared, “We’ve sent out a lot of $70 repairs with $55 dollar invoices attached … because when I repair an instrument, I play it to make sure that it plays to my standard: … and when a customer is driving 60 miles to pick up a repair, I want them to know it works well, not that it was patched up. There’s seldom a time when I’m looking for repair work. For that reason, I add on to my repairs to make ‘em last.” Boyd summarized, “Service is the only thing that we’ve had over the internet. You can get an instrument anywhere, but you can’t get a good repair anywhere.”

As news has circulated about the retail aspect of the business closing, Boyd and his team are fielding loads of communications from the public — namely from band directors who are asking, “Who’s going to take care of us like you have?” Boyd commented, “We’ve developed good relationships with a lot of band directors. For repairs, we’ll still be here, just on a more limited basis.” He also explained, “For our customer base and our active rent-to-own accounts, I want those clients to know that we’re still here to take care of them.”

While they won’t be starting any new rental accounts after July 20, Boyd Music will honor every active account and rental contract that is in existence, consistent with their long-standing values of meeting needs, always honestly, and always in a trustworthy way. And that’s the word on the street with Boyd Music — integrity, value and service.

Until their official retail closing on July 20, the store is running discounts on their inventory. For whatever musical thing you’re in the market for, now is the time to buy! In addition, Boyd Music will continue renting band instruments this fall, as an affiliate of The Music Shoppe, Inc. of Normal, Illinois.

When you stop in to make your purchase, you may see me and a few of my siblings there. We’ve grown up now so we won’t be pressing our noses to the glass counters, but we’ll still be thumbing through the music, and now that we’re not so little, maybe we will be playing the instruments themselves.

Looking ahead, Craig Boyd will open his new business on August 1: Monday-Thursday, 10 a.m. – 5 p.m., or by appointment. He added aside that he’ll probably work a lot of Fridays and Saturdays during the busy times. Instrument repairs, limited accessories, and especially those instrument “emergencies?” — no worries, Boyd Music still has you covered.

For a full letter describing the store changes in detail, visit them on Facebook at www.facebook.com/BoydMusicInc, and for the full Boyd Music experience, be sure to give them a call at 217-243-6041 or visit the store on 426 S. Main in Jacksonville.