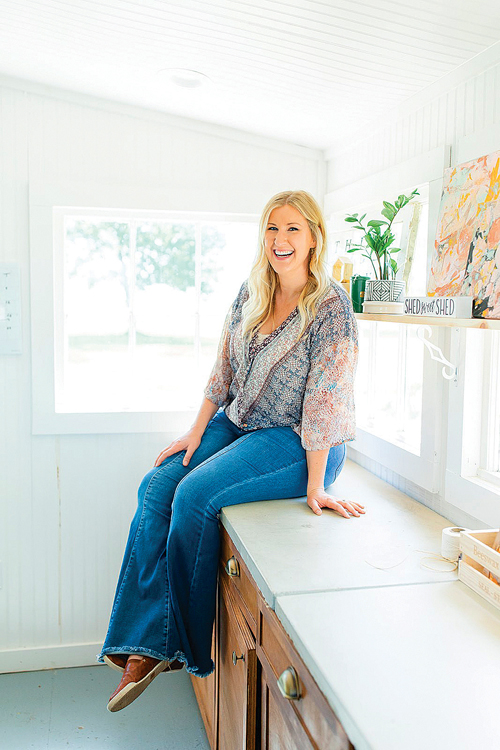 Special to The Source

Nothing Fancy Supply Co. has expanded its operation to cater to growing demand from across the U.S.

The Jacksonville company moved to a large warehouse in downtown Jacksonville to keep up with its exponential growth, which recently included 25,000 beeswax food wraps for Good Morning America. The show featured Nothing Fancy’s sustainable handmade wraps on its Deals & Steals segment on Saturday, October 30.

In the past few months alone, owner Colleen Flinn has hired two new employees and taken on a dedicated manufacturing space – while has yet to celebrate the company’s third birthday.

“When I started making wraps in my kitchen, three years ago, to sell at The Old Capitol Farmers Market in downtown Springfield, I never imagined an opportunity like this would present itself,” says the 34-year-old mom of three.

“We were bursting out of the little shed at the bottom of my garden. It broke my heart to leave the space that made Nothing Fancy what it is. However, I am excited to share the space with an event venue and fellow small business in town. The warehouse does not disappoint with early 1900s industrial character, and of course, we brought Nothing Fancy’s charm,” says Flinn. The 200 E. Douglas Ave. warehouse location offers 3,000 sq. ft. dedicated to Nothing Fancy. “There are a lot of projects planned for its future, and we are very excited to be able to experience such growth,” she adds.

It has been a massive year for Nothing Fancy, which was featured in Midwest Living magazine in the spring. This was followed by an exhibit at AmericasMart – one of the country’s largest permanent wholesale trade centers – in Atlanta in July.

To celebrate its ongoing success and move to the warehouse, Nothing Fancy hosted an open (ware)house event on Saturday, November 20. “Although the warehouse was open for the production of our beeswax food wraps, we could not pass up the opportunity to decorate the industrial space with party lights and vintage furniture,” says Flinn. “The open (ware)house event [gave] our local customers a glimpse of what happens at Nothing Fancy, along with a chance to shop some of our favorite small businesses.”

In addition to offering discontinued beeswax food wraps, Nothing Fancy was joined by One Knotty Maker, The Perfect Piece, Wilcrete, Plants and Pups, Fauna Wilde, Mimosa Bar by The Warehouse 200, Bewitching Botanical, plus Johnny and June.

To find out more, search “Nothing Fancy Supply” or @nothingfancysupply on Facebook. A bit of backstory on the owner, Colleen Flinn, and the birth of the beeswax wraps:

Colleen Flinn was born in Springfield and raised in Pleasant Plains. She attended school in Jacksonville before completing her bachelor’s degree in social work and political science at Southern Illinois University in Carbondale. She next earned her master’s in social work at the University of Illinois at Urbana-Champaign. After graduating, she was a therapist and then became the activity director at a retirement home. When she had her first child, she and her husband, Tim, moved from Springfield to Pleasant Plains, where they restored a rundown farmhouse. As their family grew, she realized how much waste they were creating that was going to a landfill and she discovered that the average family in America sends 500 Ziplock bags to landfills each year. She began researching ways to reduce household waste and even created a Facebook group to inform and help others interested in doing the same. One day she was reading about beeswax food wraps and became more curious. She could not source any from the area, realizing it wasn’t really a known product in the area, and the ones she did find were not pretty. It took her just a couple of months to perfect her recipe and create beautiful beeswax food wraps using pretty fabrics that were easy to use and accessible to all. So, she figured she could sell her beeswax food wraps at the farmers market in downtown Springfield. So, it began.

Since launching a small hobby business three years ago, Colleen Flinn has been awarded the Snail of Approval Slow Food Award for her wraps and was a Springfield Business Journal Forty Under 40 recipient this year.