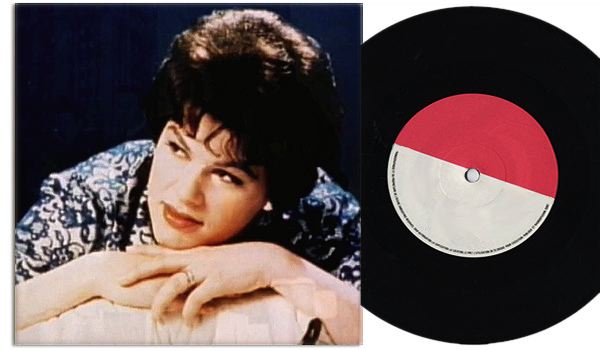 The story is too long and too intriguing to tell here. Numerous books have been written about the singing career and turbulent life of Patsy Cline. In this brief article we will share just a couple of stories to give a fleeting glimpse of one of the best-loved artists in Country Music.

She was born Virginia Patterson Hensley, September 8, 1932, in the State of Virginia.  Virginia Hensley began her singing career on local radio stations, and then began singing with area bands. She married Gerald Cline in 1953. Conflict developed when she wanted to continue her music career and he wanted her to stay home. They divorced in 1957, but she carried his last name as her stage name the remainder of her life.

Patsy married Charlie Dick in 1957 and they had two children.

She was nearly killed in a car wreck in early 1961 when she and brother, Sam Hensley, were involved in a head-on crash in Madison, Tenn. Although not a particularly religious person, Patsy related this story about her hospital stay when visited by an area preacher.

“And he said a nice little prayer, then asked if there was anything I wanted to add. ‘Dear God,’ I said. ‘I been lying and forgetting the faith I have. I know I am not worthy, but I need you so. Help me turn back on the right path. If it’s not too late. And, Lord, please let these Seventh Day Adventists get some meat in this damn hospital. I’m tired of eatin’ all this grain. That’s enough praying for today. Amen.’”

She was in the car accident shortly after she recorded, “I Fall to Pieces.” She quipped that the incident came to mind when she recorded, “Crazy.” (When she recorded the Willie Nelson-written “Crazy,” Floyd Cramer was on piano and The Jordanaires did the back-up singing.)

In November of 1961, to mark the 50th anniversary of the Grand ‘Ole Opry, the entire Nashville cast was invited to give a concert in New York City’s Madison Square Garden. Dorothy Kilgallen, columnist for the Journal-American newspaper, wrote a syndicated column, “Voice of Broadway.” In her column prior to the concert, she said this: “Everybody should get out of town because the hillbillies are coming! It’s the Grand Ole Opry Gang … The Hicks From the Sticks.”

That column made a lot of people angry … especially Patsy Cline. When she walked on stage and approached the microphone, she thought of all the historic talent that had play that venue. She paused before she sang her first song: “Is there a Miss Dorothy Kilgallen in the audience? If Miss Dorothy Kilgallen is here, would she please stand up? I didn’t think she’d be here. She’s too chicken show her face in front of a few thousand ‘hicks.’ If I ever have the pleasure of seeing that wicked witch, I’ll tell her how proud I am to be a hick.”

On March 3, 1963, Patsy Cline was ill but still gave three concerts at a benefit in Kansas City, Mo. Because of bad weather, the cast was grounded in Kansas City for a couple of days. On March 5, she declined a car trip home and accepted a plane ride with her manager, pilot Randy Hughes. Billy Walker was to go along for the trip but had to cancel and take a commercial flight to Chicago because of a family illness. He was replaced by Hawkshaw Hawkins. Hawkins and Cowboy Copas were also aboard. Randy Hughes was the son-in-law of Copas.

The plane refueled in Dyersburg, Tenn., at 5 p.m. It was recommended that they not continue because of the fog and driving rain. Although Hughes was not trained in instrument navigation, the group decided to head for home. At 6:07 p.m., the plane crashed near Camden, Tenn., just 90 miles from Nashville. There were no survivors.

It is difficult to summarize the impact of Patsy Cline on the music history of America. Her legend endures. Starting the count 28 years after her death, since 1991, there have been 12 million albums sold of Patsy Cline music.