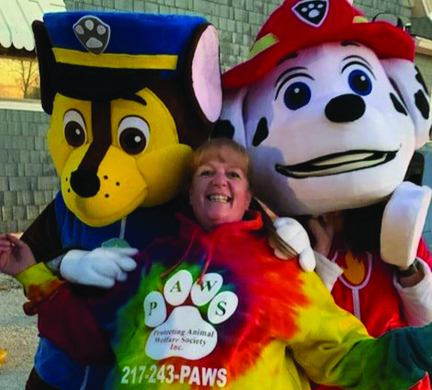 It all began 10 years ago when Lisa Jackson of Jacksonville took a step to rescue a Saint Bernard for herself and she was hooked on the concept of animal rescue. Her love for rescuing launched PAWS (Protecting Animal Welfare Society) and to commemorate their 10th anniversary, City of Jacksonville Mayor Andy Ezard has issued a proclamation designating December 10 as PAWS Day in Jacksonville.

“I have always appreciated and enjoyed working with the PAWS team and was thrilled to proclaim December 10 as PAWS Day,” stated Ezard. “Lisa, her staff and volunteers are a fantastic resource for our community and region. The hard work they provide helping our pet population does not go unnoticed. I think I speak for everyone when saying they have had a major impact and I wish them the very best in many years to come.”

Jackson began PAWS at her home on N. Main St. They would load up the animals

they had every Saturday and go to adoption events. After raising enough funds, they were able to put a down payment on their current facility in 2013 and with much perseverance and lots of great volunteer hours, convert it into a rescue facility. Their home at 400 W. Walnut St. in Jacksonville was formerly a roofing business but, even now is currently being transformed to better meet their overall needs. Turner Painting and Construction is busy converting a building into a much-needed quarantine area.

The animals they take in are from high-kill shelters or from owners who have surrendered their pet. “Every New Year’s Eve we count the number of animals that came in during the year,” reported Jackson. “2019 saw 851 rescues and our overall total was 6,156. Given some of the large rescues this year (Adams County alone had 126 at once), I’m sure we will surpass 7,000.” PAWS is equipped to handle dogs and cats but have rescued all types of animals. Horses, ducks, hamsters, guinea pigs, chinchillas, ferrets, a hummingbird, owls, deer and even a fox once. They transfer the animals to shelters that are equipped to handle them if they are not. The size of the dogs and cats determine the population they can take care of at any given time. “We have had over one hundred animals at one time at PAWS,” commented Jackson.

Operating a shelter of this size takes many financial gifts, donations of supplies and lots of volunteer manpower. PAWS has a supply donation box out in front of their facility. Through the years many people have given countless hours and Jackson feels very fortunate to have quite the team assembled for day-to-day operations. On average five people are needed multiple times during the day to take care of all the animals. Just like the breeds of dogs and cats present are diverse the volunteers come from all walks of life. “The volunteers all have the love for animals which brings us together. Once you volunteer here for a while you become like family to each other,” concluded Jackson.

To help celebrate their 10th Anniversary Sarah Shellhammer, WJIL/WJVO and Papa Murphy’s Pizza teamed up for a fundraiser to benefit PAWS. On Thursday, December 10, pizzas and cookie dough were available for purchase with all proceeds being donated back to PAWS. These were all pre-orders picked up at PAWS.

With COVID, daily operations have changed. Currently, they are not open to the public. No meet and greets or kennel walkthroughs are being scheduled at this time. Adoptions are being scheduled by appointment only. For more details or information check PAWS through Facebook. If interested in adoption, call 217-243-7297 and leave a message on their machine. A volunteer will return your call as soon as possible.