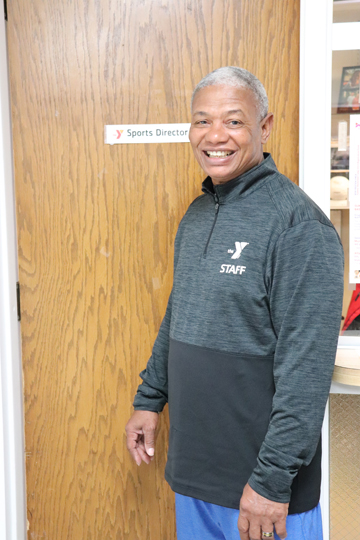 When Glenn Pickens, 65, joined the Bob Freesen YMCA as sports director at the end of January, he jumped in running. Pickens has been involved with the YMCA for many years as a referee, program participant, parent of children who have grown up being involved in the Y and its programs, and as someone who works out there each morning. He knows what people in the community want and expect of their Y; moreover, he is willing to listen and coordinate programs for the community.

Pickens is at the Bob Freesen Y every morning and again in evenings to run the daily paperwork, plan sports programs, and figure out or answer any questions people might have on all things sports-related at the YMCA.

Pickens took over the youth basketball season and is excited for the upcoming junior basketball season, a coed program for 4-6-year-olds who are not in first grade. It is a great place to learn the basics and play games.

This June, Pickens is adding a Summer Basketball Camp the week of June 6-10. Boys going into fourth and fifth grades will be in the morning session while boys going into sixth, seventh and eighth will be in the afternoon. Sign-ups have started at the YMCA front desk. Pickens says anyone with questions can reach him at 217-245-2141. Registration will go through May 28.

Pickleball at the Y has been taking off throughout the year both inside and out. Open to all, it is available 9-11 a.m. for pickup coed games on Mondays, Wednesdays and Fridays. Pickens knows firsthand how fun it is since he has been playing for a while. “We will move out to the tennis courts in the spring, when weather allows, which is always nice,” says Pickens.

Of course, the summer wouldn’t be summer without the YMCA softball season. Tuesday night men’s 16-inch softball league will take place 6-10 p.m. beginning on May 17. Thursday night league will also be from 6-10 p.m. but has changed to a 16-inch coed softball league thanks to interest from the community. Sign-ups for both begin April 1 and team registration forms can be picked up at the YMCA front desk. Again, anyone with questions can reach out to Pickens.

Pickens is also planning a summer volleyball camp, tennis clinic, t-ball and pickleball clinic, so look for more information on all of those to come soon. Also, thanks to Pickens, the Y will host the United Way Police and Fire Department softball game once the field and lights are ready. Pickens is always looking to find new activities or events that the community would enjoy and coordinating programs with the Y.

“We are excited to have Glenn officially join our team as the sports director and have already seen his energy and enthusiasm in action as he jumped right in and has the expertise and knowledge to run great sports programs at the Y,” says Mary Henry, executive director of the Bob Freesen YMCA.

Pickens also currently works for Illinois Road Contractors in Jacksonville, where he has for 37 years until he retires this coming June. Many also know Pickens from refereeing over the years for the YMCA, ISSA and NCAA.