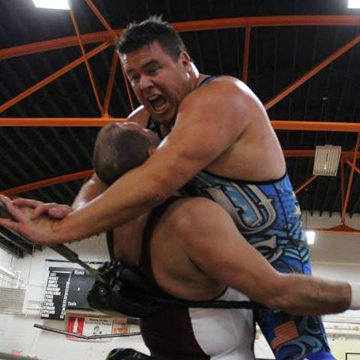 There are few sports that combine athletic performance and entertainment quite like professional wrestling. People of all ages, from grade school kids to grown men, glue their eyes to the television each week to watch their favorite wrestlers. While thousands of fans pile into packed arenas, and millions purchase weekly pay-per-view events, the wide-ranging audience of professional wrestling engages itself in the rare feats of theater and sport. And now, the stage (or ring) is coming to Jacksonville.

On September 12, the Pinfall Wrestling Association (PWA), based out of Springfield, Ill., will be invading Jacksonville’s Bogart’s Banquet Hall for an event titled “No One Survives.” As the association’s first Jacksonville stop, “No One Survives” will feature wrestlers from throughout the state of Illinois, including Heavyweight Champion “ZeroHype” Guy Smith, Tag Team Champions “The Alliance,” Regional Champion “The Young Thriller” Derek Moss and Jacksonville’s own, “The All American” Brent Dunn, among others. 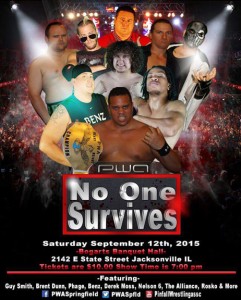 Most of the wrestlers featured in the event have either completed the six-month training program at Pinfall Wrestling Academy or are actively involved with the Academy. As central Illinois’ top professional wrestling association, all current and future wrestlers are trained by the best of the best in the PWA, such as ZeroHype Guy Smith, who received his own training from WWE legend and Pro Wrestling Hall of Famer, Harley Race. In past events, the PWA has headlined other WWE legends such as “Cowboy” Bob Orton.