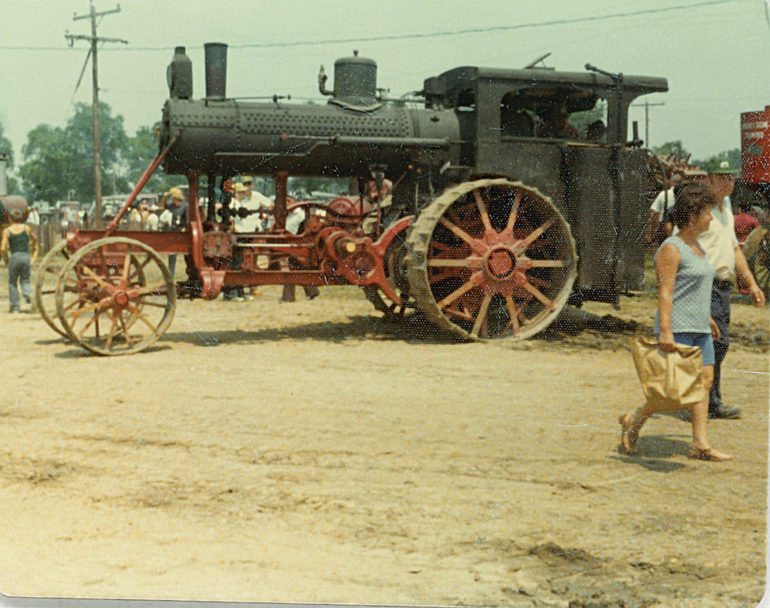 From September 27-29, the Prairie Land Heritage Museum Institute Fall Festival & Steam Show Days will celebrate 50 years! Whether you have ever been or not, there are always oodles of things to do at the Steam Show Days every year! Located at the corner of Lincoln and Michigan Aves. in South Jacksonville, the gates open daily at 7 a.m. Admission is $8 per person and children under 12 are admitted for free; as long as wrist bands are kept on, admission is good for all three days. There is no better value for a family to enjoy than these three days of unique fall fun! This year’s admission price also gets you a tethered hot air balloon ride … five to seven people can go up in the basket together.

It kicks off with the 50th anniversary ceremony at 9 a.m. on Friday, September 27 at the restored bandstand on the grounds. The ceremony will include the national anthem; special recognition of the two remaining charter members, Kenny Winters and Ted Stewart; and many local dignitaries. Friday is also ‘Education Day,’ so all student groups are admitted for free!

Enjoy rides in a true steam-powered locomotive (free for kids Friday and $1 per person Saturday and Sunday), drive a tractor, and bump up and down on the Barrel Train Wobble Wagon. Wind through the corn maze; stop, drop and roll in the fire safety house; cheer at the daily 3 p.m. tractor parades; meet animals at the petting zoo and enjoy lots of family fun.

Since teaching and learning is part of Prairie Land Heritage Museum’s charter, members teach many aspects of our rich agricultural history through entertaining and sometimes tasty demonstrations of plowing, sorghum/molasses production, threshing, bailing and grinding, soap making, corn picking and shelling, quilting and more. “The corn and cane grown by members in the approximate six acres inside the train tracks will be harvested the old-fashioned way during the show,” said Bud Robinson, member since 1986, 2001 and 2002 board president, and still an active member today. He also turned 94 years old on September 10, so if you see him at the Steam Show Days make sure to wish him a belated birthday!

“The center farm and the additional farm ground owned by the Prairie Land Heritage Museum is what helps support the museum,” says Archie Brockhouse, member since 1973 plus 1994 and 1995 board president.

On Friday, the one-room Yatesville School will have a teacher and all age and grades of students learning together the way it would have been in the past. Throughout weekend another group of reenactors will be living in tents by the log cabin (moved to the grounds in 2016), demonstrating old-time crafts and the splitting of logs and rails.

Each day the Ferguson enthusiasts of America will reassemble a tractor in a timed demonstration. How quickly do you think they can do this? Of course, there are always lots of lawn and garden tractors, gas engines, horse-drawn equipment, antique tractors and farm equipment on display throughout the grounds.

Entertainment at the bandstand begins with the South Jacksonville Little Miss Pageant at 10 a.m. on Saturday, then Double Shot will take the bandstand from noon-3 p.m. and 4-5 p.m., while Poor Farm Road will play noon-3 p.m. on Sunday.

Food is also plentiful from vendors with mouthwatering popcorn, homemade ice cream, fish, hotdogs, hamburgers and more. The Prairie Land Heritage Museum also has its own steam-cooked ham and beans, cornbread, pie and drinks served daily from 11 a.m.-1 p.m. in the barn dining room. Eating is a Steam Show must! Wander through the expansive flea market and craft area, where one can find almost anything imaginable.

For those who love to camp, there are 56 spots available for $20 per day, on a first-come first-serve basis. Campers can have 30 AMP electrical service with showers and bathrooms on the grounds. For tents with no electrical service, it is $5. For more information on the campgrounds, contact Josh Meyers at 217-416-9000. Golf carts are allowed on the grounds; each cart will be assessed a $10 permit fee for the duration of the show or on-site rentals are available. For more information, call TNT Golf Carts at 1-800-229-7274.

The Fall Festival & Steam Show began as a way of celebrating our agrarian culture. The creation of the plow, approximately 6,000 years ago, is often referred to as the “farming revolution,” it enhanced the fertility of the land. First pulled by animals to till the earth, and subsequently replaced by tractors, plowings used by more and more technologically enhanced machinery and urbanization. Farming allowed for complex social structure to develop thanks to regular stores of food, supplies and trade.

“Pat Kenny was the driving force behind the founding of the Prairie Land Heritage Museum Institute,” said Brockhouse. “His dream was to establish a working museum so that the public, which was getting more and more removed from the agriculture of the area, could witness actual farming with antique machinery and preserve the knowledge of those farming methods of the 1800s and 1900s.” Pat Kenny served as president of Prairie Land Heritage Museum from 1969-1979.

All 35 charter members are recognized at the beautiful memorial on the north side of the office.

A portion from the Prairie Land Heritage Museum Institute Bylaws:

The object for which this corporation is formed is to promote, supervise, acquire, build and complete a farm museum to promote, in every way, an educational and recreational program for both rural and urban citizens and youth in central Illinois.

Brockhouse said, “from 1970-1975 they held the steam show at the Morgan County fairgrounds. I showed gas engines during the shows at the Fairgrounds but later became a member. Then in 1973, the 96 members of the organization began talking to legislators about acquiring the former State Hospital grounds at Lincoln and Michigan.” By 1976, the show moved to the grounds where it is today, although the only building then was the big barn. “We had our meetings in the barn except in the winter we’d use various business in the area until the current headquarters building was built with its meeting room and kitchen in 1992-1993. Now we are able to hold meetings here.

We have also hosted Christmas parties, Halloween parties, wedding receptions, anniversary celebrations, an ice cream social, a ham and bean supper and more,” continued Brockhouse. They welcome everyone to their general membership meetings on the last Friday of the month at 7 p.m. Membership is very inexpensive – single person is $10 and a family $15. They would love to have families keep passing down these amazing traditions. Members are needed that can do everything from farming, electric work, plumbing, construction and more during workdays on the grounds. Members and show participants come from all over, including California, Iowa, Missouri and Illinois.

Prairie Land Heritage Museum Institute has imported many buildings to its grounds. The Big Brown Barn, built between 1918-1920 and used to house dairy cows and young heifers, had been moved to the State Hospital grounds in late 1958 or the early 1960s before the land was acquired. The Red Barn, built in 1930, was donated in 1991 by Karry Freesen and moved in January 1992. Liberty Church, built in 1900 after several older versions of the church had been replaced or burned, was relocated from the cemetery at the end of Liberty Road to the Prairie Land Heritage Museum grounds on February 14, 1994, with the aid of a Caterpillar and a Mueller tractor. “The ground had to be frozen so it wouldn’t sink,” recalls Dale Lair, board president 1994, 1998 and 1999. “It was one of the coldest days ever, wasn’t it Bud? About four below zero, but we got it moved.” Both nodded in agreement as they recollected the bone-chilling day they moved the church. It was later painted and refurbished, and Lair was one of the members that that helped to replace the bell with one built to be identical to the original in May 1994.

Other buildings transported to the grounds include the blacksmith shop, shown in a photo from the 30th anniversary booklet by Linda Berry in its original location in Franklin in 1912; and the general store, although it fell apart on its move, so members built one to fit the foundation. The Farm and Home Museum #1 displays farm rooms including a kitchen, bedroom, washroom, music room, dining room and parlor, as well as places that would be near farmland such as a lady’s dress shop, a dentist office and a veterinarian’s office from that time. Military uniforms are also displayed honoring our Veterans. Farm and Home Museum #2 is used to house larger farm-related items like wagons automobiles, an airplane and tractors.

“One of our best additions a few years ago was modern bathrooms and showers,” said Hank Pool, this year’s Fall Festival & Steam Show Chairman. “That has been a great addition for our visitors, vendors and campgrounds during the Steam Show.”

So, no matter how young or how old, everyone in the family can find interests to keep them busy all weekend! Come enjoy, learn, eat and support our agricultural history at The 50th annual Fall Festival & Steam Show during the weekend of September 27-29!