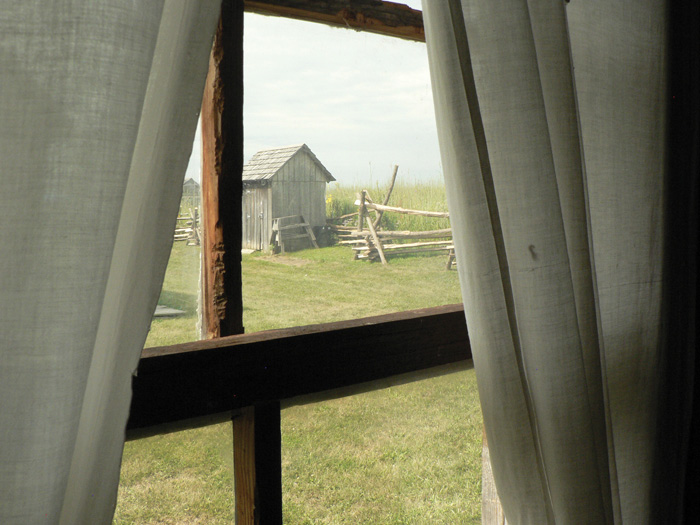 A recent photo excursion led me into a cabin, where worn curtains framed a prairie filled with coneflowers, blazing stars, and butterflies. The view of Rexroat Prairie in Virginia, Illinois, created a concern within me. How did women of the prairie become the backbone of their families? Perhaps the modern day women of the prairie, found at the Farmers Market in Lincoln Square, could give me the answer.

In 2014, through the support of family and her brawn, Kaylee Robinson found the CULTIV8 Farm at 2700 Loami Road in Franklin, IL. This year Kaylee began her college years and her younger sister, Sadie, followed Kaylee’s dream. Sadie’s smile and enthusiastic personality directed me toward her. “Blackberries are our farm’s specialty,” said Sadie. Also grown on the CULTIV8 Farm are okra, kale, corn, tomatoes, and seasonal produce. According to Sadie, the Robinson family works as a team: from late winter to the harvest season. “I learned to work hard to get what you want,” said Sadie. Sadie, along with her supportive family, come to the Lincoln Square Market every Tuesday, Thursday, and Saturday. (For further information contact CULTIV8 Farm at 217-371-1416.)

While we leave the voice of one novice, let us move toward a veteran prairie woman, Brenda Conn, owner of Triple Creek Farm Greenhouse. In the 1980’s Brenda’s flower business began to supplement her family’s income. Soon fresh along with dried flowers became Brenda’s expertise. From early January until December, Brenda oversees the planting and selling of flowers and produce in two locations: Virginia and Petersburg. Brenda’s summer statice reminded me of Vermont: where lavender, basil, and rosemary dried upside down on my mantle. During the later part of summer, Triple Creek Farm Greenhouse’s huge mum and pumpkin display create a fall celebration at the Lincoln Square Market. At the end of the harvest season, Brenda invites all to come to “Christmas at Petersburg” where one will find various holiday items. Few smiles come from Brenda. As Brenda states, “I am too tired to smile.” However, if you look into Brenda’s blue eyes, you can see a twinkle. (To learn more about Triple Creek Farm Greenhouse go to www.triplecreekfarm.com.)

During a recent visit to the Farmers Market, the thought to purchase pink and white decorated cupcakes entered my mind. My mouth began to water, until a sign appeared: Pawtastic Bakery. This followed with an introduction to Beth Wright. If you recall prairie women tended to their children, carried out farm responsibilities, and cared for farm animals. Beth is the master of three dogs. Three years ago, Beth visioned home baked pet food. As she baked treats, she relied on the judgment of her dogs. Without a hand count, Beth read her dogs’ consumption of peanut butter, apple delight, and bacon cheeseburger treats. These also proved to be a favorite among owners of canine. Through family and friends’ support, Beth researched canine treats. On most Saturdays you will find Pawtastic Bakery at the Lincoln Square Market. (For further information contact Beth at bmwklw24@frontier.com.)

Without question, modern prairie women mirror a tenacious determination exercised by yesterday’s women of the prairie. To answer how the prairie women became the backbone of their families, we need to heed their vision, work ethics, along with the support, and encouragement they received from family and friends. Yes, modern prairie women can relate to the words written by Willa Cather found in “My Antonia”, “…they came in tired from the field…feet numb…(and) hands cracked…”

(Note: On Tuesdays, Thursdays, and Saturdays, the Farmers Market takes place in Lincoln Square Shopping Center at 901 West Morton in Jacksonville, IL. All Market days begin at 7 a.m. until all items are sold.)