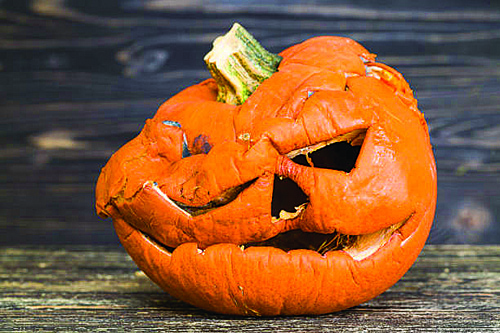 As the calendar turns from October to November, our toothy jack-o’-lanterns start to look like deflated basketballs. This means millions of Americans need to dispose of billions of pumpkins.

While many people toss these festive, yet mushy winter squash into the trash, this only adds an immense amount of organic material into the landfill, which then creates the greenhouse gas methane.

Yet, pumpkins are nothing more than overgrown vegetables. Something must want to eat these things. Right? The social spheres are buzzing with alternative uses for a jack-o’-lantern past its prime, but many of those ideas are myths. Here’s the truth behind some of those unhelpful suggestions:

MYTH: Find woods, fields or nature preserves to smash open pumpkins to compost. First, this would be considered littering and certainly something illegal, especially for a nature preserve. It is all too common for natural areas to become a dumping spot for yard waste, including pumpkins and straw. The thought is these items will compost, but this is not true composting. According to Extension educator Peggy Doty, “This smothers native plants and creates odd little microhabitats that are not healthy and full of molds.” Because of this, pumpkins can now be found growing in preserves, probably from last year’s pumpkin dump. Doty continues, “The straw not only smothers plants but takes forever to decompose and they dump it right on the road, so we spend money on staff to get it picked up.”

MYTH: Leave broken-up pumpkins for wildlife to eat. According to AgriLife Extension wildlife specialist Maureen Frank, Ph.D., “Pumpkins that have been used as jack-o’-lanterns or other decorations could also be used as a snack for wildlife.” Pumpkin seeds can be baked and used in a bird feeder; however, avoid using salt or other seasonings.

Lots of different animals will eat pumpkins. Like humans, the critters may be a bit choosy and go for the fresher pumpkin. Still, feeding the animals can create problems. Leaving pumpkins in ditches can draw animals close to vehicles. Plus, many municipalities are actively trying to manage out-of-control wildlife populations, such as white-tailed deer. While I am an avid supporter of wildlife, laying out a buffet can have consequences. Frank advises, “It’s probably best to share with birds only.”

MYTH: Pumpkin seeds are a natural dewormer. The idea of using pumpkin seeds as a dewormer has been passed down from previous generations. There has been some research on this topic and the studies I’ve read do not show any correlation to pumpkin seed consumption and worm control in livestock. Some researchers do mention that pumpkin seeds may help to support conventional deworming medication but is no substitute.

MYTH: Give your pumpkins to a livestock farmer. As was stated above, animals will eat pumpkins, but what about our domesticated livestock? When it comes to eating pumpkins, hogs and poultry seem to be the most reliable consumers. Poultry will need the pumpkins smashed open or cut into chunks. Hogs have the strength to break open the pumpkins themselves. Since pumpkins are not a routine part of their diet, this can cause digestive upset to livestock.

Good Growing Tip of the Week: Pumpkins can be incorporated into a backyard compost pile or dropped off at a municipal or commercial composting facility. Some communities are even organizing “pumpkin smash events,” where residents can bring their pumpkins to get catapulted into a dumpster and then transported to a composting facility. Whatever option you choose, avoid tossing fall décor in natural areas without permission, and have a Happy Halloween!