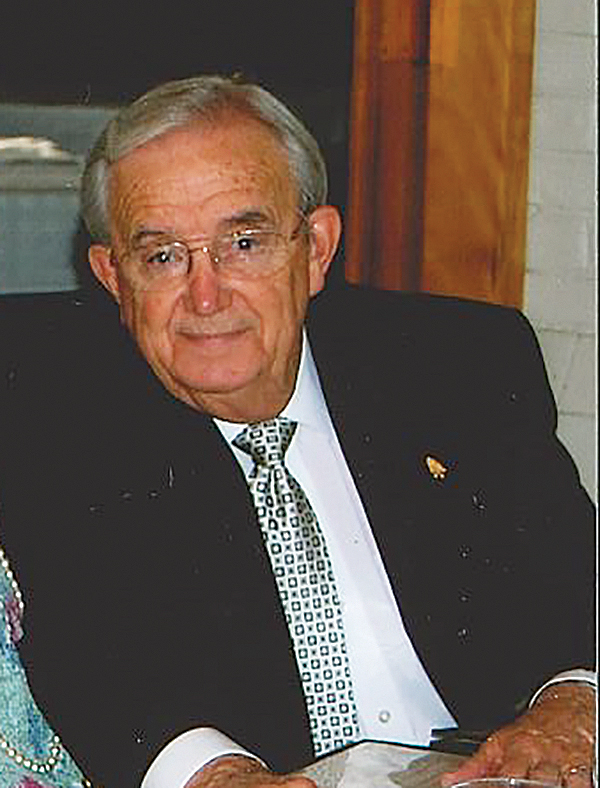 The life Ralph Gonzalez has made for himself can truly be called the American dream. He has made an impact in both local and state activities, yet he remains so humble that he was surprised The Source Newspaper would want to write about his life.

He was the youngest of five children born to Joaquin Sr. and Gloria Gonzalez and is a first-generation American. “I think one of the things that even people close to me don’t know is my heritage,” says Gonzalez smiling. “They see my name and think well he must be Hispanic of some sort.”

Gonzalez says his father was from Gijon, Spain and his mother was from Salinas. Gonzalez reveals, “My dad and mom both went to school through the fifth grade, but things were tough back in the old country and they had to go to work.” He remembers his parents talking about the Civil War in Spain and the coal mine where his father worked shut down. Things were bad and there were no jobs. Gonzalez continues, “They had been married a year, then my brother Jack was born. My father said to my mother, ‘We can’t live like this. We have to go to the Estados Unidos.’”

In Oct. 1916, his father sailed to the U.S. through Ellis Island. “He left my mother in Spain until he could make enough money to get her here too,” explains Gonzalez. In May 1917, his mother and brother joined his father in America.

Spanish was their native tongue, but they all learned to speak English. Gonzalez had three brothers and a sister. “Each of us was born in a different town,” explains Gonzalez, “and each town had a smelter in it because my dad was a smelter worker.” He was born in 1930 during the Great Depression in Beckemeyer, Illinois.

Gonzalez says eventually his father saved enough money to buy a little tavern and a house.

His brother Jack was drafted into the service in early 1942 mistakenly since he was not officially an American Citizen. He was surprised when a Sergeant asked him how he got in the army because he thought of himself as an American. The Sergeant delayed the military paperwork until late 1942 when his parents’ and his citizenship were official.

Gonzalez’s brother Joe was drafted into the Armored Tank Corps. “During the war, he went through the North African Invasion,” discloses Gonzalez, “in Feb. 1944 was wounded in Italy when he stepped on a land mine which blew the pack off his back giving him some back scars and hurting his right arm. After a hospital stay, he could have come home but decided to stay with his friends in the unit. Normandy was June 6, 1944. He was killed July 7 when his tank corps met the men from Normandy to reinforce them. The Germans pounded them to keep them from coming up and wiped out about all of his unit. He is buried in Florence, Italy at the U.S. National Cemetery there.”

Ralph, the last at home, graduated from Carlyle High School in 1948.

Gonzalez and his wife, Evelyn, met at the V&H Lounge Bowling Alley in Breese on a Sunday afternoon. He says he and his friends “saw these girls on the alleys and we asked if we could bowl with them.” At first, the girls said no, but eventually the boys were talked them into sharing. Gonzalez continues with a smile, “There was a dance that evening, and I asked Evelyn if ‘Maybe we could have a dance?’ She said that would be fine. We had that dance and we’ve been together ever since.” They married in 1954 and now have four children spread across the country: Michael, in South Carolina; Steven, in Tennessee; Maria, in Virginia; and Stuart, in California.

“Most of my education I got at night,” he explains. “I went to James Milliken University my freshman year, then my sophomore year I went to McKendree College.” At McKendree, he remembers needing a foreign language credit and the family of one the instructors grew up with his mother’s family in Spain. Knowing Spanish was his first language, the instructor allowed him to just take the final for the class to earn his credits.

Later he drove a 90-mile round-trip St. Louis from Germantown three nights a week while he worked at the American Smelting & Refinery Co. He finally earned his B.S. degree in business and finance from Washington University in 1952 at age 31. With two children at graduation he says, “It was more than I would want to do again, but having gone through it, I really appreciate that degree! I still have my diploma hanging up in my office.” He was the first in his family to attend and graduate from college.

In 1962, Gonzalez joined Christian Universal Life Insurance Company and within six years was named its president. Gonzalez remembers, “The general counsels of my company and another knew each other. They spoke and then my general counsel came to me and said, ‘Ralph, I think we have an opportunity to merge our company with Central National Life. I know the folks and they are good people.’ That was Dick and Harris Rowe.”

“We met at a hotel in Litchfield in 1970,” recalls Gonzalez, “and within two or three months we decided to merge the companies.”

“In the beginning, I stayed at the old Dunlap Hotel during the week and would go home on weekends,” says Gonzalez. I said, “you know Evelyn, I don’t know, why don’t you let me continue to go weekly before we decide to move.’ But she was wise and said, ‘No, we’re not going to do that. We’re going to Jacksonville, getting acquainted, settled and putting the kids in school.’ So we moved in 1971.”

“And that was the start of something really big,” recalls Gonzalez. “We later merged three other companies, Key Life here in town; National Security of Kansas City, Missouri; and Lincoln Heritage of Lincoln.” Gonzalez was executive vice president and became president in 1974. “We operated those companies until 1982,” he continues. “Then John Deere, the implement company, was interested in buying an insurance company and they chose us in 1981. They acquired us outright in 1982. I stayed on as president until my retirement in 1991.” But he says John Deere left in the late 1990s after losing 1200 insurance agents when made a poor decision to change company sales modules.

“When I retired, Harold Cox from Farmers State Bank and Trust Company, said ‘I want you to come work for us and help us with some investments,’” recalls Gonzalez. “And I’ve been there ever since. Joy [Becker] has been extremely kind to me to let me stay on the board and let me work there. I credit her for my longevity.” Gonzalez tuned 90 on October 23.

His work life and family were not the only things that kept Gonzalez’s life busy. His civic-mindedness is one of the amazing parts of his life.

Gonzalez never shied away from assisting in the local community or local politics. Besides the Farmers State Bank and Trust Company board, his service included the president of the Chamber of Commerce and the Jacksonville Country Club, he chaired the Jacksonville Police and Fire Commission, and he was on the board of the United Way, Morgan County Heart Walk, Jacksonville Economic Development, Jacksonville Library, and was involved in the Advisory Business Councils for the University of Illinois and Illinois College, the Elks Club and Our Saviour Church.

After Ray Green ran the first Dreams campaign, he called Gonzalez, “‘You and I are going to run the next Dreams campaign and we are going to give away money.’ And we did! It was a big success. The next year they talked me into running the Dreams campaign again and I trained Dennis Gears from Grojean’s to run it the following year.” Gonzalez is still one of Routt/Our Saviour’s biggest cheerleaders even today.

Gonzalez’s community recognitions are many: Citizen of the Year in 1981, Jaycee’s Distinguished Service Award in 1982, the Circle of Excellence Award from the Chamber of Commerce, and a Paul Harris Fellow by Rotary International. He has served as Grand Marshal for the St. Patrick’s Day Parade and received the Friend Award from Routt High School.

Gonzalez says, “I was always interested in so many different things and tried to find time to do all of them.”

One of those interests was thoroughbred horse racing. Gonzalez says, “I actually owned horses and raced horses at Fairmont in Cahokia. The first little horse I owned won his first and second races but got hurt in his third.” After consulting experts who said the horse would not race again, Gonzalez took it home and nursed him for about a year. “About then a fellow asked to buy him and race him.” The man planned to race him in ‘Pot Towns.’ “Pot Towns are where the purses are small and competition his great,” Gonzalez explains. “He had a successful year with the little horse,” said Gonzalez, obviously pleased that the little horse could still race as he was bred to do.

That passion for the sport and some political allies, eventually led him to serve as a member and then chairman of the Illinois Racing Commission, serving for a total of 24 years and becoming the longest-tenured member of the Racing Board. He was recognized by the Illinois Department of Agriculture for his years of service to this board. He also served on the National Racing Commission and the International Racing Board.

Gonzalez was an active member of Morgan County Republican Party and when Jim Thompson wondered who could run his campaign in Morgan County, Gonzalez said, “I’ll run it for you.” He says, “Thompson had a tough race against Adli Stephenson and when the election was over, Thompson won by 5400. Morgan County carried 3100 votes for him. And he never forgot that.”

In 1984, as chairman of the Chamber Prison Committee Gonzalez helped persuade Governor Thompson to locate the minimum-security prison in Jacksonville creating 3000 new jobs for the community. Additionally, Gonzalez helped with the Edgar campaign, the Reagan campaign, both Bush campaigns and ran Congressman Bob Michel’s campaign.

Gonzalez says, “I often say coming to Jacksonville was a great move! When I was young, my dad would share his philosophy. One thing I never will forget is when he said, ‘Ralph, if you go through life and have five close friends that’s where it is. So, if you find five, hold on to them.’ And he was right! I’m lucky to have more than five. We’ve met some great people and my kids still get together with their friends from here also.”

What more could you ask out of life? Family, friends an amazing career created from hard work, community participation and a willingness to be involved in a variety of interests. Gonzalez certainly embodies so many of the great aspirations that his parents had in mind when they first decided to come to the United States.