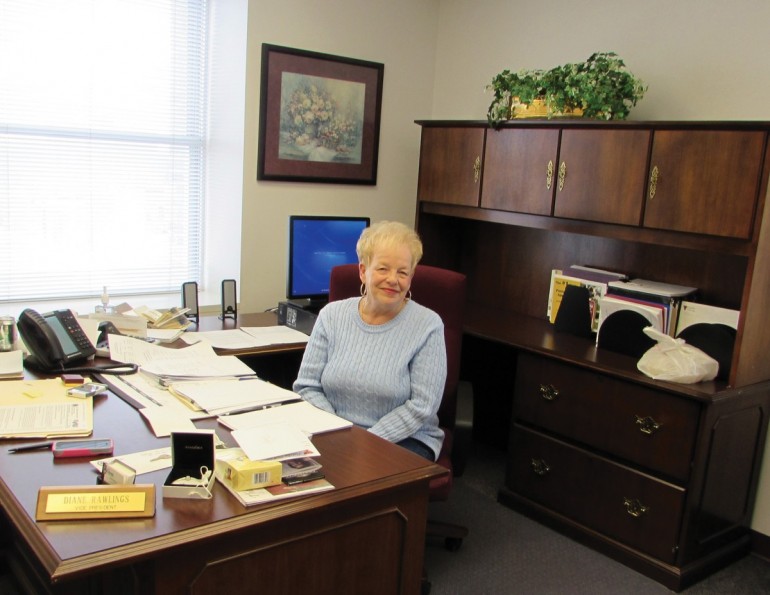 In today’s ever-changing, fast-paced world, staying in one place for an extended period of time has become the exception rather than the norm. Even more rare perhaps, is someone who’s able to sustain the same job at the same company for more than a decade, let alone four. The 21st century has produced a society that appears to be in constant flux, continuously altering its path towards the direction of the latest and greatest, from new fields of occupation to the most recent internet trend. Which is why Diane Rawlings’ career at Farmers State Bank is so interesting: the narrative of a woman being hired by a company in 1968 and retiring from that same company more than 46 years later – without having taken a single detour – constitutes a refreshingly anomalous story.

As I sat with Ms. Rawlings on her last day of work – knowing that in just a few hours she would walk out of Farmers State Bank & Trust Company for the last time as an employee – one could sense the mixed emotions of someone approaching the end of a long journey.

Unlike today’s job market, which persistently stresses the importance of a college education, the 1960’s was a time when one could obtain solid employment without the prerequisite of a higher degree. And here again, Rawlings – native of Chapin, IL – is aberrational, having started her working career essentially straight out of high school.

“I came into banking at a very good time,” Rawlings said of how she was initially hired, “the bank was actually – I think – looking at women a little more in respect to different positions that maybe men had always held. So I’ve been very fortunate along the way, being at the right place at the right time.”

The majority of Rawlings’ time at Farmers State Bank has been spent working in their downtown building – one of the few structures in Jacksonville that stands higher than seven stories off the ground. But as for the earliest portion of her career, Rawlings spent several years managing the bank’s new branch on West Morton Avenue.

“Actually when I first started I was out at the Morton branch,” said Rawlings, “I was managing that [branch] when it was new, I think around 1976. At that time we worked out of a little trailer until the new building was done, and then we moved into the building, which is of course still there today. I was out there 3 or 4 years and then I came back to the downtown building.”

When I asked Ms. Rawlings whether the decision to stay with Farmers for so long was consciously made or more coincidental, she said “I really never gave it a great deal of thought, because I was always happy with what I was doing and the responsibilities I had. Not one time did I ever consider looking for another job, which obviously doesn’t happen very much today.”

With a career that spans nearly 50 years, Rawlings has undoubtedly made a number of memories at Farmers State Bank, developing friendships that will continue well into her retirement.

“I think that’s the thing I’ve enjoyed most is the interaction with people, and when I say people I mean both customers and employees,” Rawlings said reflecting back on her time at Farmers,” Being in Human Resources you meet so many people over the years as employees come and go, so I’ve had a lot of friendship and made a lot of memories.”

Now that she has punched her time card for the last time at Farmers State Bank, the thing Diane Rawlings most looks forward to when it comes to retirement is the opportunity to spend more time with her family, especially her children and grandchildren. And although she tells me that she’s not much of a traveler, Rawlings and her family plan to visit Florida in the near future. Luckily for Ms. Rawlings, this trip won’t cost her any vacation days.