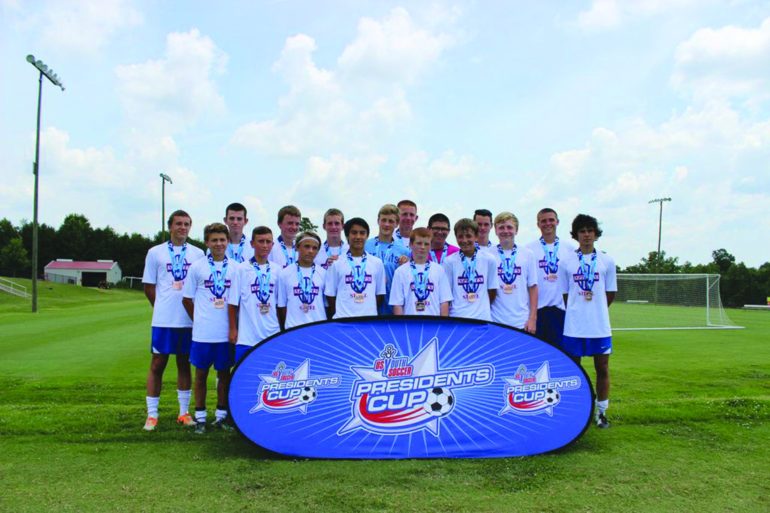 The road to Greenville SC and a chance at a National Soccer Championship began in Memphis TN on a chilly weekend in late February 2014 for the SASA Spirits 99 U15 boys’ soccer team.   The finale would be played over 4 days in the heat and humidity of Greenville SC.

The first match against the Soaring Capital Firehawks (NY) got off to a great start when forward Logan Willard scored in the forth minute of play.  Within two minutes the Firehawks would level the score at 1-1.  The battle continued until the 39th minute when Steven Albers would find the net to give SASA a 2-1 lead into halftime.  The second half play brought only one more goal as Logan Willard would strike again in the 71stminute to put the score at 3-1 and lead the SASA Spirits 99 to its first win.

Day 2 put the SASA Spirits up against a very strong Huskies team from Texas.  A win would almost assure that SASA would play for the Championship.  The Huskies turned out to be the toughest team SASA had faced all year and half time of the match came with a 0-0 score.  The second half would see many opportunities but it was the Huskies who would find the only score of the match with just 10 minutes to play.  The loss was just the 3rd of the season for SASA and put the team at 1-1 in the tournament.

Up next, a must win game 3 with the Tacoma United B98 Chelsea team from Washington State.  The match was into the 20th minute before the first goal when SASA’s Nate Cheung placed the ball past the Tacoma United keeper for a 1-0 lead.  Just 9 minutes later Tacoma United would find an equalizer that would lead to a 1-1 halftime.  SASA’s Logan Willard would score 17 minutes into the 2nd half providing the 2-1 lead. Unfortunately Tacoma would score 2 more times to defeat SASA 4-2 and send them to a consolation match on Sunday with their day 1 opponent from NY.

The Consolation match saw solid defense from SASA and first half goals from Kelby Phillips in the 5th minute and Nate Cheung in the 29th minute.  Logan Willard would tally 2 times in the 2nd half to give SASA a 4-0 victory and a 3rd place finish in the National Presidents Cup.