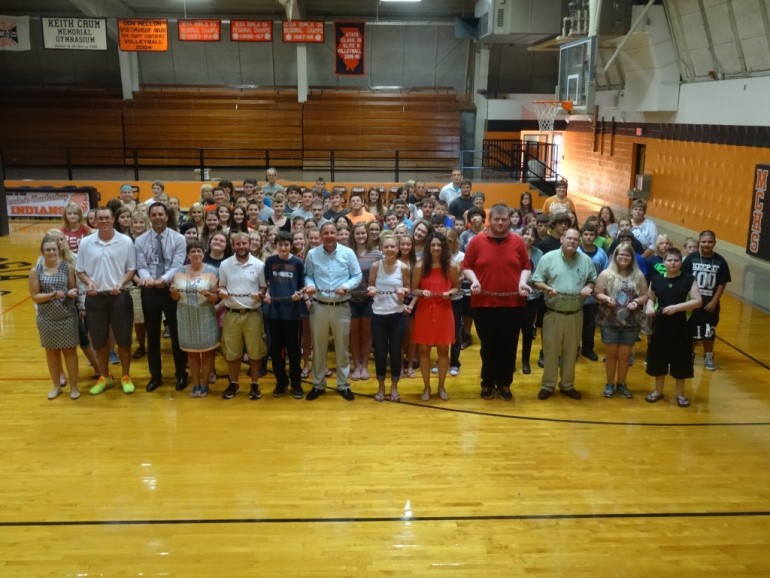 Life can change in a blink of an eye, and for Cary Knox, his life took a whole new turn after coming to teach autistic students at the Meredosia-Chambersburg School District. Upon arriving at the school district, Knox was drained professionally after going through a rough time. John Redman, an autistic eighth grade student of Knox’s, would be key to bringing happiness back into Knox’s professional life. He credits Redman as being his ‘link of strength,’ someone that kept him and his career going. A ‘link of strength’ can be a family member, friend, co-worker, neighbor, anyone who has a positive influence on one’s life, regardless if it is helping someone get through a hard time or follow a dream.

“John needed me. I needed him more than he learned from me. We needed each other,” Knox said. “I had an autistic student that made me feel needed, relevant again.”

Knox and Redman have been teaching their fellow peers at school through their teacher, student relationship, how important it is to have someone to rely on in life. On the first day of school, August 31, an assembly was held at the Meredosia-Chambersburg Junior/Senior High School. Knox called Redman down to the gymnasium floor as his ‘link of strength.’ Various other faculty and students were called down by their peers as his or hers ‘link of strength’ and then the entire student body came to stand on the gymnasium floor. Faculty and students were holding a log chain to represent how strong a person’s ‘link of strength’ is in his or her life. A chain is made strong by its links.

“Surround yourself with the right kind of links, and you can be indefinitely strong with what you do,” Knox said.

During his rough time, Knox up with what is now his registered trademark, ‘links of strength,’ as he reflected on all the people who had been there for him. He first introduced his idea to a more athletic audience. In 2014 he submitted a video to Under Armour in the hopes of having a graphic t-shirt design made for ‘links of strength.’ When his dream through Under Armour did not take off, Knox decided to broaden his horizons “from an athletic perseverance message to encompassing strength of the modern family.”

Knox made wall art with inspirational messages bordered by a chain for GardenFire out of Arkansas. He designed and marketed everything himself, with his artwork reflecting his deep Christian faith and love of family. Knox’s artwork is now sold through the Lawrence/Dexsa Company. Currently his artwork is in the marketing phase with the new company. The artwork, such as plaques and picture frames, will be made of artisan glass and have inspirational messages all thought of by Knox, who is now a published author.

“I am really proud of something I have done, accomplished,” he said. “I have never been stronger than I am now.”

Hallmark, LifeWay and Amazon will all carry his artwork. As of January 2, 2016 there will be five pages in the ‘James Lawrence’ catalog reserved for ‘links of strength.’ The product will then be available for purchase in all 50 states, New Zealand, Canada, United Kingdom, Costa Rica and Australia.

Knox is originally from Roodhouse. He is a graduate of North Greene High School and Southern Illinois University-Edwardsville. Currently Knox resides in the country in Hillview.