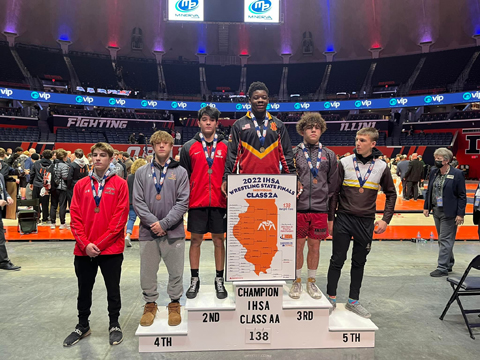 Reif Earns State Medal While Making Crimson Wrestling History: Collin Reif is the 2022 IHSA 2A 138LB sixth place wrestler! Collin wrestles for the Jacksonville High School Crimsons. As a sophomore Collin took sixth place at 132LB in the Illinois Wrestling Coaches and Officials Association (IWCOA) state finals. After earning that 6th place medal and compiling a record of 33-5 the 2021 IWCOA season ended in June. Collin was back on the mat in the fall for his 2021-2022 season! Going to Champaign, Collin carried a 32-6 record. For three grueling days, February 17-19 in Champaign, Collin worked through a tough IHSA finals bracket wrestling 6 more matches.

On Saturday, February 19 Collin completed his Junior season as a Crimson wrestler capturing a sixth-place finish and earning a spot on the finalist podium! Collin finished the season with a 35-9 record. The sixth-place finish also put Collin into the Jacksonville Crimson Wrestling record books. Over the last 30 years many great wrestlers have gone through the Crimson Wrestling program; Collin became the first to place in consecutive state tournaments. Fellow teammate Luca Theis was a win away from a medal, falling short in what wrestlers refer to as the “blood round.” There will be much excitement in the Crimson wrestling room over the next year for Coach Dustin Seacrist and his Crimsons! Congratulations on another special season, Collin!