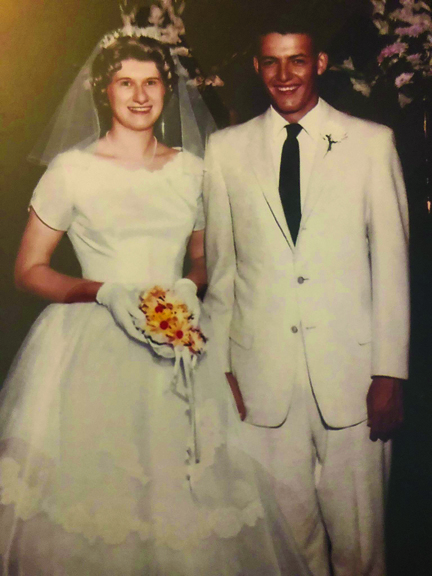 They went to Jacksonville High School together. They sat next to each other in homeroom. Some 60 years later, they are saying “I do” for the second time! These lovebirds still have it!

When they graduated high school in 1960, James Robson, Jr. and Patricia Phillips had the whole world before them. Robson enlisted in the Army and did basic training at Fort Leonard Wood, Missouri. He came home on a three-day leave with a ring surprising Phillips. She said yes and they married after he finished basic training. This ceremony was at Grace United Methodist Church on June 28, 1961, with Dr. Frank Marston officiating.

After the wedding, James Robson, Jr. was shipped off to Fort Gordon, Georgia for schooling and then to Berlin, Germany for two years. During a leave, the couple conceived their first baby and after Robson completed his tour in Germany, his bride and son Kevin, then nine months old, joined him for a short time in North Carolina before returning to Jacksonville to put down roots. This young family began to grow and soon Kevin was joined by three other siblings: Danette, Bruce (now deceased) and Glenn.

During their life here in Jacksonville, James Robson served as a police officer with the Jacksonville Police Department from 1965 until 1968 and with the Illinois State Police from 1968 until 1978. He was also manager of Wareco on North Main Street in Jacksonville and then went back into law enforcement when he was elected Sheriff of Morgan County in 1994 until his retirement in 2006. Patricia Robson worked for Jacksonville School District #117 in the kitchen preparing lunches for the students. She also worked in the bakery at the IGA store on Morton Avenue. She rounded off her time in the workforce with employment in the City of Jacksonville Water Department. She retired in 2005.

One thing that is evident among the members of this family is that James and Patricia Robson are so committed to each other and the entire family. It is a bond that is unbreakable. This family spends every holiday together as well as all family birthdays, and they even vacation together. To celebrate their mom and dad’s 60th wedding anniversary was important to the children but how they did it was just as important. Their decision was to have them renew their vows while at their favorite vacation destination. They had to let Dad in on some of the plans, but one thing was for certain — if anyone was going to be surprised, it was their mother

The ceremony took place on Kevin Robson’s boat in St. Joseph, Michigan. All the details were handled by the family without mother knowing. They bought a dress for her; made a cake; arranged for flowers, makeup and hair; and they made sure that everyone was there if able. The night before the big event they gave their parents an anniversary card which revealed the plans for the next day.