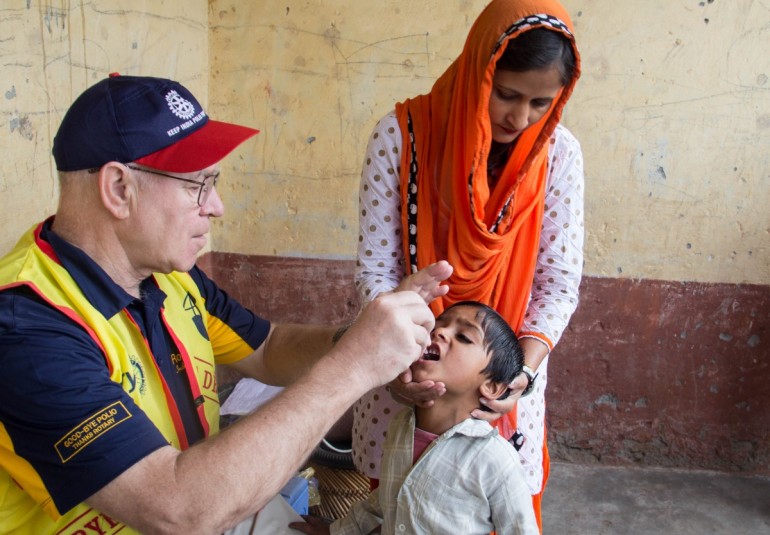 When Rotary International invited members to participate in a sponsored National Immunization Day trip to India, people from across the globe responded. The organizers sent 13 volunteers last year and decided to increase participation to 40 this year because of the tremendous response. Charles and Lynne Sheaff received the invitation and immediately wanted to be a part of “clearing the planet of polio.”

The International Rotary started the Polio Plus program to administer live vaccines in 1985. They collaborate with the Indian government, the World Health Organization, and the Bill and Melinda Gates Foundation to make vaccinations possible. Over the past 30 years, polio cases have dramatically decreased globally, with only 73 recorded cases last year. 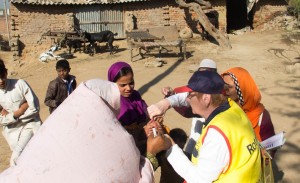 The Sheaffs joined a highly organized effort to continue herd immunity to polio throughout the world. Their team traveled to the Mewat District near Dehli and joined volunteers from Canada, Australia, South Korea, France, Belgium, the UK, and the US. The group divided into teams of six, with a goal to reach as many children, ages 0 to 5, in the district as possible.

On day one of National Immunization Day (NID), volunteers set up immunization stations in easily accessible locations, such as schools. Local volunteers, usually nurses and teachers, tracked which children in their community received vaccinations. 132,944 children received polio vaccines in the Mewat District this first day.

For day two of NID, volunteers knocked on the doors of children who did not attend the previous day’s clinic. This allowed them to talk to families about the risks associated with polio and address misinformation about the vaccine. These efforts helped 154,538 more children become immunized.

Charles Sheaff is grateful to be a part of this important work. He calls his efforts, “Just a speck of dust in the grand scheme of things.” While individual volunteer efforts might seem small alone, Sheaff says it was apparent that their help and participation energized local volunteers. 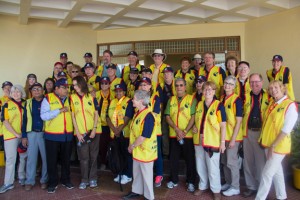 The group at Mewat

“It made what they were doing that much more supported,” Charles explains. The help of volunteers “made them feel like the world was with them and the Rotary was behind them.”

• 6.3 Million ice packs to keep all those doses of polio vaccine in the 2.0 million vaccine carries bags cold

Charles and Lynne loved participating in this important work and joining alongside volunteers from around the world. They look forward to one day telling their grandchildren, “We were a part of getting rid of this awful disease.”