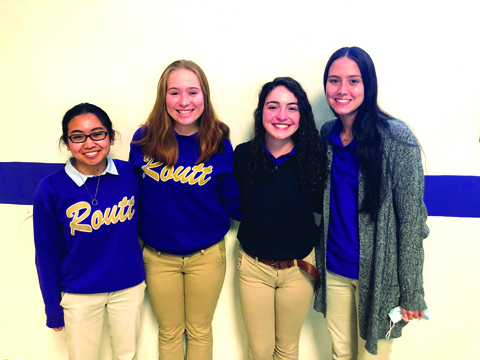 In late April, Routt Catholic High School was notified of four individuals who were named Illinois State Scholars. This distinct honor is given to seniors based on a combination of their GPA, class rank and ACT score. It is an incredibly impressive feat that takes hard work and dedication, and we’re thrilled to introduce the following students who were selected.

Aniya Pallera is the daughter of Lawrence Johnson and Ayrin Pallera-Johnson. While at Routt, Aniya has been involved in swimming, Scholastic Bowl, crochet club, book club, NEHS, NHS, band and choir. Outside of Routt, Aniya enjoys reading as well as needlework, specifically crocheting and cross stitching. After graduation, Aniya plans to attend Illinois College and study computer science.

Emily Cosgriff is the daughter of Jamie and Cathy Cosgriff. While at Routt, Emily has been involved in volleyball, softball, bowling, football cheer, chess, ambassador club, student council, crochet club, NHS, NEHS, band and choir. Outside of Routt, Emily serves as a volunteer coach for the Our Saviour School softball team. After graduation, Emily plans to attend a four-year university and major in psychology.

Victoria “Tori” Fellhauer is the daughter of the late Suzan Fellhauer and Mike and Kim Anderson. While at Routt, Tori has participated in volleyball, basketball, swimming, track, football cheer, ambassador club, NHS, NEHS, student council, the Morgan-Scott CEO program, band and choir. Outside of school, Tori enjoys making bracelets, photography and playing the guitar, saxophone and ukulele. After graduation, Tori plans to attend the United States Naval Academy or a university to participate in ROTC while majoring in either mechanical engineering or legal studies.