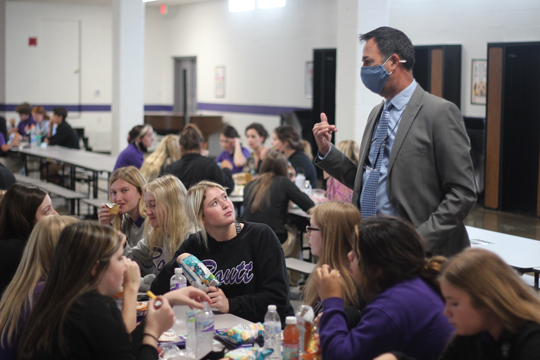 People choose careers because they enjoy what they do, and they want to make an impact in some way.

When you ask people in education why they chose that field, most likely you will hear that they want to make a difference and help make the community a

better place. One local educator embodies all those attributes.

Stepping into the principal’s shoes at Routt Catholic High School (RCHS) and coming out of retirement is Dan Carie, a veteran educator from the classroom to

administration. He joined the family at RCHS on July 1, 2021. He earned a Bachelor of Science in elementary education from

University. Caries’ career spans 33 years serving in six different junior highs or middle schools as a teacher and four schools as an administrator.

His last administrative job was at Meredosia Junior Senior High School, a job that brought him back to the Jacksonville area for the first time since his undergraduate work at IC.

“I was looking to get back to a small-town community school where everyone knows everybody,” stated Carie. “After I officially retired, I started subbing at Routt and other schools.”

While involved at Routt the nominating committee asked Carie to be a part of their school board. “I felt I still had the energy and motivation to continue assisting

students to be their best.” When the principal’s job opened, it was very easy decision to become one of the candidates.

Hailing from a large Catholic community, Teutopolis, faith has always been a major component in his life, and this was an opportunity for him to help the students grow in theirs.

“Expressing my faith every day is important,” Carie remarked. “Stepping in during a pandemic, we have all learned how to lean on our faith in these trying times.”

Carie added that the RCHS family has been very welcoming, and he has enjoyed getting to know everyone. When asked what the one thing would be he would like to instill in his students he answered that he wanted them to follow and exemplify Jesus in all they do and say. He also

desires that they work hard and do their best in everything they get involved with. Currently, Routt has 26 staff members and 123 students.

Mr. Carie is very personable. The usual high-fives and fist bumps have been

replaced, for the time being, by cautionary requirements to keep everybody safe. Some challenges have been wearing face masks properly, keeping social distance and constantly disinfecting the building to maintain a sanitary environment.

RCHS has maintained an in-person environment this whole school year. “But we are always on the alert and ready to go to remote learning at a moment’s notice,” he commented.

Since entering the arena of education, Carie would say that the inclusion of electronics into the classroom and the student’s lives has been the biggest change he has seen. “Information is so readily available and social media plays a big role in

students’ extracurricular and free time,” he said. “The students themselves are still

basically the same.” In addition to the electronic connectivity of the students of today, there are also many more activities that they can be involved with.

When not busy with school, Mr.

Family time is also very important. The Caries’ have four children, Adam, twin boys, Blaise and Vince, and a daughter, Sloan, who is at home. They also enjoy spending time with their five grandchildren.