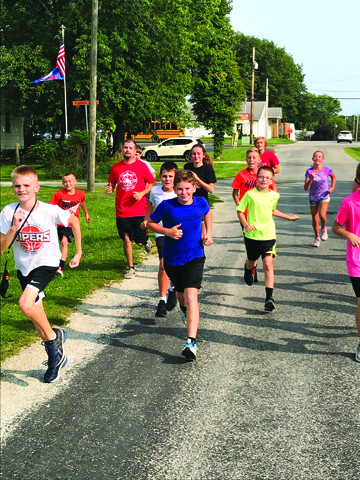 There are many races for runners held throughout the country to commemorate a day or an event. For many runners, scheduling or distance to the event might be factors keeping them from participating. One local runner has removed these barriers for himself by running virtually.

Christian Bonjean participated in the second annual 9/11 Remembrance Run, an event to honor the victims of the 9/11 terrorist attacks, which was hosted by The Virtual Running Challenge.

A decision Bonjean had to make was choosing which charity out of the two assigned to this event, that he wanted a portion of his entry fee to support.

The charity he selected was Tuesday’s Children, a nonprofit organization with the mission of providing a lifetime of healing for those whose lives have been forever changed by terrorism and traumatic loss.

Tuesday’s Children has helped more than 27,000 individuals from not only terrorist attacks but also national traumatic events such as Sandy Hook; Parkland and Orlando, Florida; and other tragedies.

Each runner was assigned the name of someone who lost their life during the September 11 attacks. Bonjean ran to honor the memory of Moira Ann Smith, a New York City police officer who was killed trying to rescue victims trapped in the World Trade Center. Smith was the first officer to report the terrorist attacks when she witnessed the first plane strike the first tower.

“I had been wanting to run in a virtual race and one day I saw a post on Facebook about the second annual 9/11 Remembrance Run,” remarked Bonjean. “It was the perfect opportunity to do something to give back to the families who lost loved ones to these horrific events.”

While this was Bonjean’s first virtual competition, he is no stranger to running. Growing up in Franklin, he began running with the junior high cross-country team while in sixth grade. Bonjean is currently the physical education teacher at Bluffs High School and Bluffs Elementary School as well as the high school health teacher. He also is the junior high cross-country coach for Franklin and Waverly, where he coaches with his dad, Patrick Bonjean.

Each year, more and more races have added a virtual component to their events, allowing runners to participate in events that they would normally be unable. With virtual running, runners can participate by removing some of the obstacles such as travel, traffic, weather conditions or unexpected schedule conflicts.

The organization that sponsored the virtual run that Bonjean participated in sponsors 21 different events throughout the year. More information can be obtained through www.thevirtualrunchallenge.com