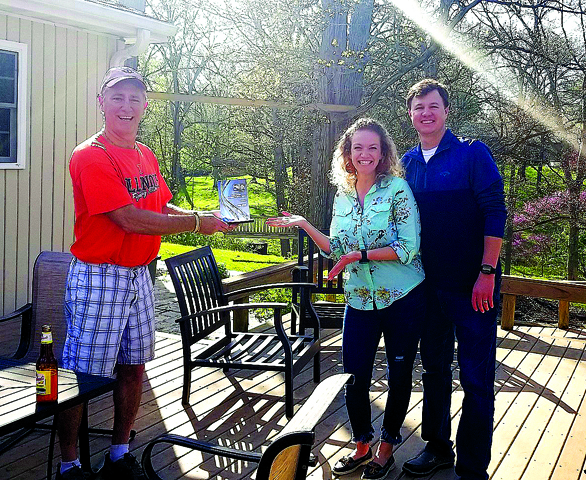 Gary Scott has been awarded the 2020 Prairieland United Way Helen Baldwin Award. Many people know Scott for his voice, as the Co-owner and General Manager of WLDS/WEAI Radio, but Scott is well known in the Jacksonville community and is a long-time Prairieland United Way supporter. Scott and his wife Debbi served as the 2013 campaign co-chairs and have been on Prairieland United Way’s leadership donor roll for many years. Scott has also helped through the years by serving on our annual allocation panels to determine funding for our agencies.

Scott can be counted on to support United Way efforts by promoting our events, spreading the word of press releases and allowing United Way agencies, campaign chairs, and board members to speak on air through What’s on Your Mind and his AM conversation segments. Scott was also a Co-Host of this year’s Price is United event. He provides a vital link to communication with our community through his platform. Not only does he build awareness of our work in the community, but he also coordinates a campaign with the radio station, and can proudly boast they consistently reach 100% participation from their employees

Beyond the passion he has for United Way, Scott is involved in many community organizations including, but not limited to, past President of the Jacksonville Kiwanis Club, which he may have the code name “Mr. Pancake” in one of their iconic events, serves as an Emcee for community events such as Dancing for the Stars and Chamber events, serves on the Passavant Board of Directors, serves as a Cantor at the Church of Our Saviors, a board member of the Jacksonville High School Hall of Fame and he’s been inducted into the Illinois Basketball Coaches Hall of Fame.

The Helen Baldwin Distinguished Service Award was developed in 1994 to recognize individuals who go above and beyond in their volunteer activities for Prairieland United Way. It was named for its first recipient, who chaired two campaigns and served as residential and business committee chair for many years. Helen Baldwin was a long-time board member who helped develop the allocations process and the Pacesetter leadership giving group. She continues to support United Way, both financially and with her time. Some past recipients include Linda Donovan, Joy French Becker, Ernie and Helen Downey, Mike Halsne, Bev Coats, Bob Sibert, Paul White and most recently Bob and Janet Chipman.

The Prairieland United Way Board of Directors is proud to recognize him for his outstanding devotion to our community.