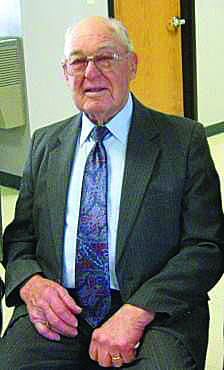 Still living in his home by himself, he was a POW in World War II. Doris (Muntz) Vestel reached out about her father, sharing that he was the “last one left in his unit in the Army,” and that, “he wrote his military story when he was in his eighties.”

She recalls him telling stories of his time in Germany, of how they were the coldest winters – and yet he still never had even a cold. “Apparently, God took care of him. He always worries about other people. His sister lived until 107 … and she was sharp.”

Muntz was married 74 years. Vestel tells, “the day before, the VA is doing a recognition for all the POWs … it would be great if you could give him a shout out for his birthday.”

His daughter explains how her father not only likes to write, but also loves card showers. She exclaims, “He would enjoy that. He’d be tickled; he’s not going to get the party he wanted.”

If you would like to send a “Happy 100th Birthday” card to join in on the card shower for our area Veteran, please use the following address: