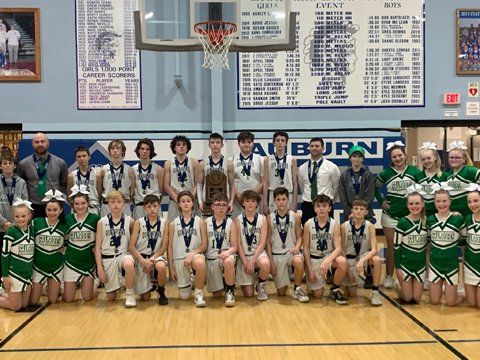 Shamrocks State Runner-Up: The Our Saviours Shamrocks 8th grade boys’ basketball team are the 2021-2022 the IESA 8A State Runners-Up. They finished the season with 28 wins and 2 losses, the second coming in the IESA state championship game to parochial Danville Schlarman (22-1). The Shamrocks had the lead, 5-4, at the end of the first quarter but fell behind going into halftime, DS 15 – OSS 11. They played a tight second half, outscoring Danville Schlarman 11-10 in the 3rd quarter. The lead proved to be too much to overcome though as the Shamrocks fell 36-31. In the championship game the Shamrocks were led in scoring by Bryson Mossman, the leading scorer for OSS this season. The Shamrocks had a spectacular season. Congratulations Our Saviours Shamrocks boys’ basketball!