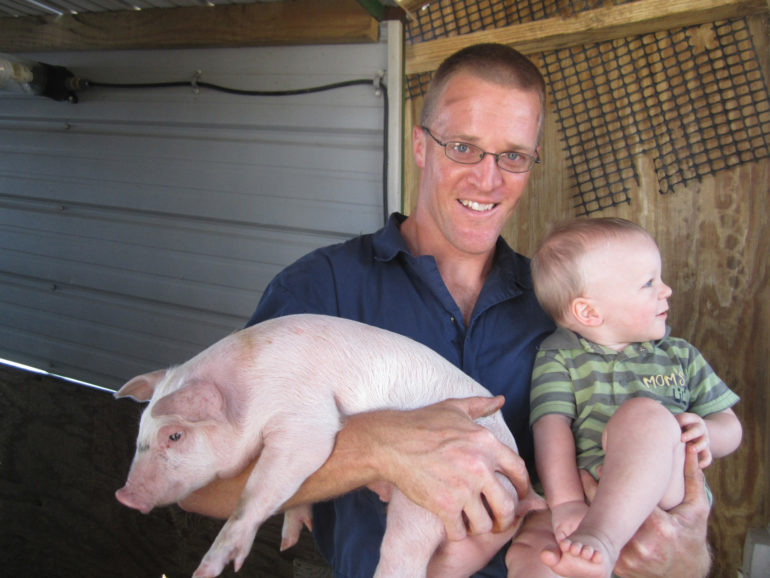 Building the Six family built in 2009, top photo. Ben Six with his son, Joseph, stand and pose while holding one of their pigs.

When speaking with Genny Six, you can hear the love and excitement she has for the new hog confinement building located on the Chapin farm she and her husband, Ben, share with their children, Joseph and Anna. John and Betty Six started six generations of farmers and are proud three of their five children chose remain with the family farm: Ben, Brian (wife Katelin, son Jackson, and another baby due in November) and Brandon. “We have seen first hand the teaching of a transferable skill,” Genny told me, “when you teach children how to care for animals, it illustrates to them also how to care well for the people.”

The Six boys offset college costs by working for Maschhoffs, one of the largest family owned pork production companies in North America. After 12 years of managing company property, the Six boys decided to begin owning  and running their own buildings, while still  raising Maschhoffs’ livestock. Belief in family farm, ensuring animal well-being, and environmental concern are at the top of the company’s list of priorities.

The Six Family Farm certainly fits this characterization. They are currently meeting the standards of excellence and exceed all requirements of State Law under the Livestock Management Facilities Act. The new building’s climate control is determined by the age of the pig they are raising. For example, when they receive piglets into the nursery, they weigh no more than 15 pounds and need a warmer environment of around 80 degrees. As they age, the climate lowers to 72 degrees. Ventilation has improved with window curtains that can be raised or lowered for fresh air and multiple fans to circulate the air. The pens inside the building have built-in sorting pens that are easily modified and adapted as needed. For example, if there is an injury or illness, these pigs can then be sorted into their own area to protect them and other pigs from harm. The new pen layout also reduces the number of farmers required to manage and move the hogs.  These advancements make a less stressful atmosphere for the livestock on the farm. Once the hog reaches the age of 5 ½ months and weighs 280 lbs., they’re loaded and sent out and the cycle begins again. 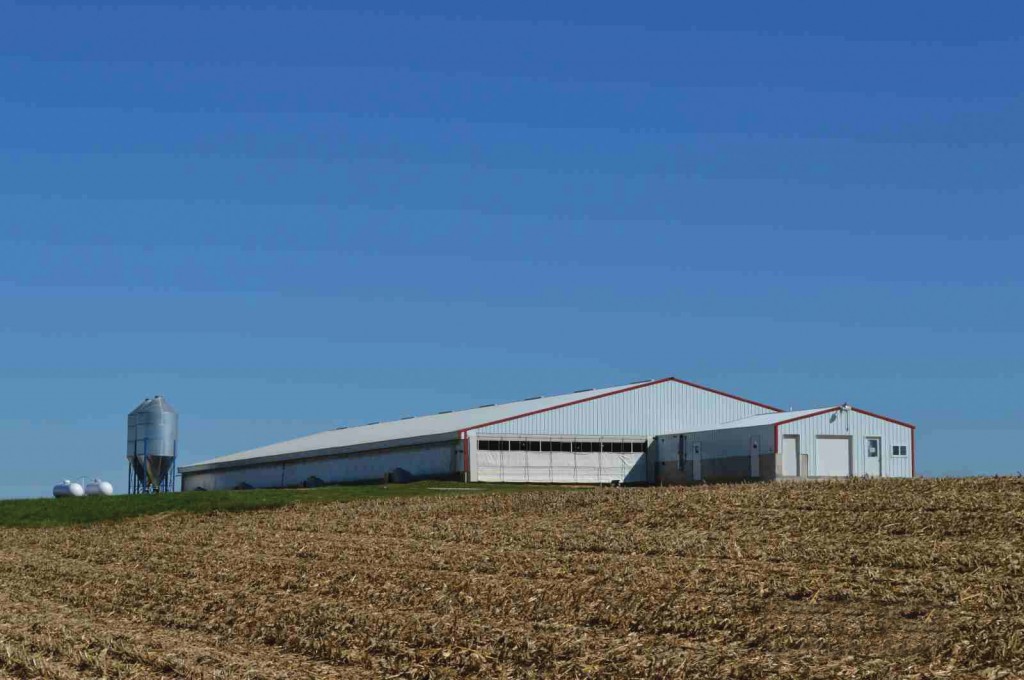 Since the sustainable farm also has an agricultural crop, manure is stored and used for farming. The water supply, that they use for watering the animals, comes from a pond located on the property. The farm is ½ mile away off of the road and the nearest home or building to the farm is also more than ½ mile away. Trees surround the farm to buffer odor.

The overwhelming attitude of gratitude throughout our phone interview was evident. Many times Genny impressed upon me about how thankful she and Ben were to be able to farm. “Farming in the 80’s was a truly hard time for farmers. We’ve just been truly blessed our family work ethic gives us the opportunity to expand and diversify our farm.”