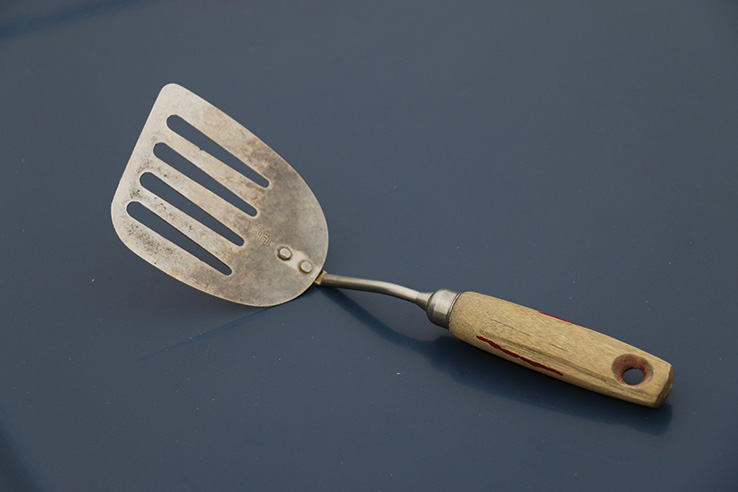 It was a year past her leaving that Anna made her request, a simple thing and reasonable, that William bring with him the spatula, the one with the red handle. “I kept it in the drawer by the stove,” she said. He thought a moment, then said, “I’ll look for it.”

They had come a long way in their marriage of more than twenty years, through good times and difficult times, committed all the while to achieving a better life for themselves and the children. Their lives were shaken by the assassination of a President, a period of social and racial unrest, and a long drawn-out unwinnable war that divided the country. There were family losses, too but Will and Anna worked through them, just as they did a failing economy.

In the better years they had acquired a small apartment in town, but with no tenant now there was no income from it. In the struggle to make ends meet, Anna found a job in town. By now the kids were old enough to work, found jobs and began going their separate ways following more the influence of their own time. Will was tired of working so long in a profession that required strength and stamina and paid little reward. Less work came his way. Yet he plodded on, weaving a worrisome path between despair on one side and exhaustion on the other.

In the winter of the country place, it began to snow early in the season. It snowed hard and often, deep and pure, a miracle over the rural landscape. This would be the winter of their discontent, swept in on a northeastern gale. The temperature dropped steadily. This time it was more than Anna could deal with. She was very uneasy late on this Sunday afternoon, two days past Christmas-the first Christmas the kids did not come home. Will stood by the decorated tree, looked out the bay window towards the willows, heard the wind roar, saw swirling snow cascade off the roofs and the early winter darkness nudging in. There was no doubt the roads would be closed by morning.

Will noted Ann’s tenseness as she sat reading, huddled in a blanket at the end of the couch. He thought of the empty apartment in town with no tenant. In a quiet steady voice he said, “Anna, would you rather be in town closer to your work? I think I can get you there if we leave before the snow gets any deeper.” He was startled to hear himself present such an idea, but he knew Anna would not be happy missing work.

Anna did not answer but went directly to her closet and gathered some essential clothing and put them in a shopping bag. She took an armload of blankets and a few books, their movements were quick and efficient from working together so long. “When the roads clear and the weather settles, you can come back out,” he reasoned to her. She made no comment, but put on her coat and scarf and was ready to go.

They were able to drive through the blowing snow, shoulder high drifts, and uncertain footing. The reached the protection of town and a warm place. He settled her in the apartment and made her comfortable. He’d have to hurry along to the country place before the roads drifted shut. He turned to leave. Looking back and seeing her standing alone, he found it hard it to go.

It was late and dark by the time he returned to the house, now quiet and empty. The blowing snow continued to fall.

In the days that followed, the roads were cleared. He brought her things she asked for to make her place more comfortable. With each trip, her leaving became more real. The kids were Already away, gone out of them and lost in a world of their own. Now Anna was gone, too.

Will closed off the empty, unused rooms. He wore heavy sweaters and sometimes a coat in the chilling house. Will sat close to the warmth of the wood stove for hours in contemplation and reflection. On better days, he walked the paths and roadways of the rural countryside. Sometimes he enjoyed a visit with neighbors.

In the spring Anna did not return to the country place. Will felt no anger, just a weighty disappointment somewhat in himself and all the things that had taken place but change things he could not. Through it all, a sincere respect remained. Each had concern for the other. He could see she was happier alone and near her work. There were times-cordial times when the family was all together, but those times were becoming less frequent.

Will remembered the words of an old judge at breakfast one morning. The judge had said, “It seems to me that an awful lot of the world’s trouble is caused by someone thinking they own another person. They never do.” Will was learning that it takes a lot more courage to let someone go than trying to keep them.

It was the following December that Anna wanted Will and the kids to come to her place on Christmas day. That’s when Anna called and asked him to bring her the spatula. “I really miss it, “she said.

Will found it in a drawer beside the cook stove. The red paint was almost gone from the smooth wooden handle. It was small to match her small hand. He held it a soft feeling not unlike Anna’s hand. He turned it, studied it, and held it awhile. After all they’d been through for so many years, “Is this all she really missed?” he thought. She did not miss the house he had built for them, did not miss the country setting, the roses he had planted, the trees, or the brook beside the house. Only the spatula. Will put it back in the drawer and stood there in the silence of an empty house.

That Christmas was years ago. Anna never mentioned the spatula again. Life goes on and life is good for all concerned. Everyone is much older now in William and Anna’s family. There have been marriages and remarriages, grandchildren galore, boyfriends and girlfriends and new friends. Smiles are on the faces of a new generation. Anna still asks them all to come to her place on Christmas day. Respect, cordiality and a good time prevail among the extended family who attend all the day long.

Miles away in a drawer by the stove in Will’s kitchen rests the same small spatula. He has picked it up so many times, turned it in his hand and felt the smooth softness. Something in him will not let it go – at least not yet.