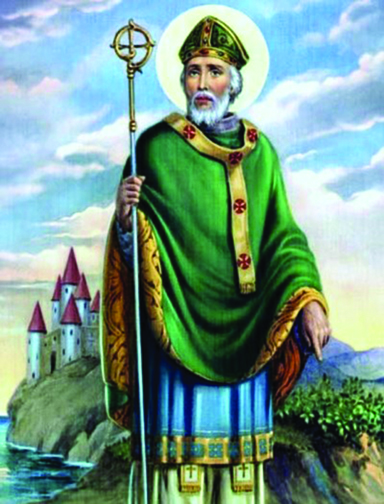 St. Patrick’s Day is celebrated annually March 17 and brings light upon the saint’s religious feast day and the death of St. Patrick himself in the fifth century.

Saint Patrick, the patron saint of Ireland, was born in Britain and was kidnapped by Irish raiders at the age of 16 and taken to Ireland, held as a slave for six years. When he escaped, he returned to Britain and undertook serious religious training in the Christian religion and was ordained as a priest.

Saint Patrick returned to Ireland after 15 years in Britain and is credited for bring Christianity to Ireland. He is believed to have died March 17, 461, and is famously known for explaining the Holy Trinity using the three leaves of a native Irish clover, the shamrock.

The Irish have been celebrating St. Patrick’s Day for over 1,000 years and the first parade for this holiday didn’t occur in Ireland, but instead took place in the United States. On March 17, 1762, Irish soldiers serving in the English military marched through New York City and celebrated with music and food, allowing the soldiers to reconnect with their Irish roots while being away from home.

The celebration spread throughout the United States, but New York City’s St. Patrick’s Day Parade is now the world’s oldest civilian parade and the largest in the United States with around 150,000 participants each year. Parades also take place in many American cities including Boston, Philadelphia, Savannah and Chicago (famously known for dying the Chicago River green in celebration of St. Patrick’s Day).

There are many traditions that are recognized with St. Patrick’s Day. Have you ever wondered why people wear green during this holiday? Surprisingly, green was not always the iconic color of the holiday; originally, it was blue. Green was thought to have made a dominant appearance as a tribute to the Emerald Isles and from the flag of Ireland itself.

Green is also the color of the native shamrock which St. Patrick used in his teachings of the Christian religion. People also celebrate by feasting upon the “Irish” dish of corned beef and cabbage, but corned beef is not part of the original traditional Irish meal at all. The Irish immigrants in America could not afford Irish bacon, so they substituted the bacon for corned beef, which was a cheaper alternative.

Chicago is one of the few cities that adds to the festivities by dyeing the Chicago River kelly green with around 40 pounds of dye that lasts a couple of hours. St. Patrick’s Day traditions are one of a kind. As time nears, start expecting to see seas of people in green marching in parades, feasting on traditional Irish meals and celebrating the patron saint himself!