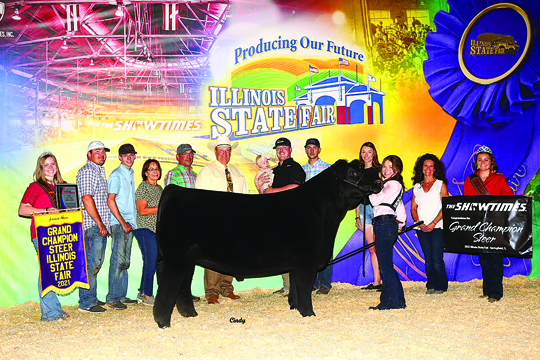 Illinois State Fair brings opportunities for youth across the state to showcase their talents. From crafts and food to livestock. each exhibitor displays their hard work and dedication for the judges and the fairgoers.

The culmination for the livestock exhibitors is the Governor’s Sale of Champions, and one rural Winchester native didn’t do too shabby.

Her journey to champion status began at a young age watching her brother compete showing his steers. “As he headed to college, I knew he wouldn’t be able to continue, so I took over the halter,” Landrey Freeman recalls. “He was always showing me what hard work and dedication would do and passed that passion onto me.”

Freeman started showing livestock in 2019 in Missouri during the spring and summer. In the summer of 2020 she showed a heifer by the name of “Betty” that did quite well. During the “Open Show” at the Illinois State Fair, Betty won the Champion Maintainer Heifer. Then came “Bob Bobbas.”

In November 2020, the Freeman family purchased “Bob” from the May family in Wisconsin. Settling into a routine was key from the very beginning. “Many early mornings were spent out in the barn making sure his daily routine was done properly,” remarks Freeman. “Every night required going to the barn to complete that daily schedule.” Fast forward to the summer of 2021 and Freeman was ready to put Bob through the paces.

After qualifying at the county level, she was ready to put him on the big stage at the Illinois State Fair. Weighing in at an impressive 1,400 pounds, the 1 ½ year old steer competed against many others from across the state. The result was incredible for the first-time exhibitor. Bob earned the title of Grand Champion Steer and solidified a spot in the Governor’s Sale of Champions on August 17. Hard work and dedication paid off and in a big way.

Illinois First Lady MK Pritzker placed the winning bid in the livestock auction of $105,000. This was a record-breaking bid, which was previously set in 2016 by then First Lady Rauner at $104,000. Freeman received half of that. Ten percent went to 4-H and FFA, 15% went to the reserve grand champion steer and the remaining 25% went to other breed champions such as Angus, Shorthorn and Herford.

Through exhibiting livestock, Freeman has met many incredible people within the livestock industry. “Countless memories with friends and family have been made throughout this experience. Memories I will look back on with gratitude,” she concluds. “I want to encourage the younger kids to always give it their all because in the end their hard work will pay off.” Both Betty and Bob were great summer experiences.

Freeman is the daughter of Nick and Jessica Freeman of Winchester and is a senior at Winchester High School. She has been active in 4-H since the age of eight. She has been a member of FFA and Key Club all four years of high school. Upon graduation, she plans on attending college.