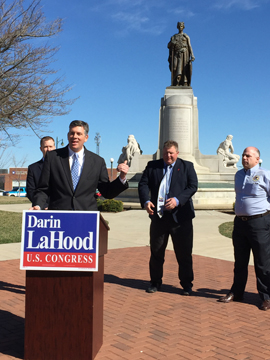 State Senator Darin LaHood, Republican Candidate for the 18th Congressional District, is a man firm in his convictions. He is a right-winged conservative who is zealous about fiscal responsibility, fighting against Common Core and placing term limits for elected officials. As a self proclaimed eternal optimist, he roots unapologetically for the Chicago Cubs. However, on one very important debate in Central Illinois, LaHood remains impartial; both John Deere and International Harvester tractors adorn his desk.

Born and raised in the Peoria, Ill., area, LaHood is the son of former United States Department of Transportation Secretary Ray LaHood. Upon graduating from high school, he received his Bachelor’s degree in Political Science from Loras College, and later obtained his Juris Doctor degree from The John Marshall Law School. During his professional career, Darin LaHood has served as Assistant Attorney with the United States Department of Justice, Assistant State’s Attorney for Tazewell and Cook Counties and as a Legislative Assistant with the United States House of Representatives in Washington, D.C. LaHood currently practices law with the Peoria law firm Miller, Hall, & Triggs and serves as member of the Illinois Senate representing the 37th Legislative District. LaHood’s most recent endeavor was not one he anticipated undertaking so soon.

“Twelve weeks ago I was not planning on running for congress, but things changed pretty quickly on March 17th when Congressman Schock resigned. I talked to my wife and family about it, prayed about it, and got a lot of encouragement from people that I currently represent in my senate district. With all of that, I decided to give it a go,” Darin LaHood shared.

And give it a go, he certainly has. During the past three months, Darin LaHood has campaigned heavily in Illinois’ 18th Congressional District, an area that encompasses parts of Cass, Morgan, Pike and Scott Counties. Since March, Darin LaHood has visited Jacksonville nearly a dozen times, including an initial visit to formally announce his candidacy on the Square.

“Obviously Morgan County is an important part of this district, and there’s a reason why there is a congressional office in Jacksonville,” noted Darin LaHood. “If elected, I am committed to keeping that office there.”

In addition to his vow to keep the Jacksonville Congressional Office opened, Darin LaHood promises to continue to be a strong advocate for agriculture, the largest industry in Illinois’ 18th Congressional District. “Farmers are the best stewards of land,” stated Darin LaHood. “The more we can keep the federal government out of their lives, and let them do what they do best, the better! That is the foundation for the way I look at agriculture policy.”

As a result of Darin LaHood’s strong support of agriculture in the Illinois Senate, he has been the recipient of the Illinois Farm Bureau’s Friend of Agriculture Award on two separate occasions. This award is given to individuals based on their positive voting records on legislation that significantly impacts Illinois agriculture. Darin LaHood believes that his familiarity with his constituents is what makes him the most desirable candidate for this congressional position.

Darin LaHood and his wife, Kristen, reside in Dunlap, Ill., with their three sons. As an avid outdoorsman and sports enthusiast, his life outside of the political arena is spent camping and hiking with his family and coaching his sons in basketball and soccer. With what free time is left, Darin LaHood enjoys watching a Cubs game and, of course, dusting his tractor collection; both the green and the red.